Blacklisted – No One Deserves To Be Here More Than Me 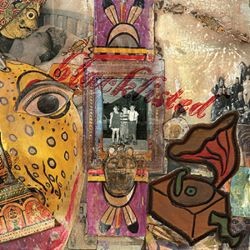 As always before a record comes out, people were talking about it. I heard people saying stuff like “They’re using instruments that are not really instruments” (right) and “It’s going to be way different, like a real ROCK record”. Needless to say I was quite excited to hear the end result. What to expect?

Just so you know in advance, I’m more of a fan (for the lack of a better word) of the later material. I do love the demo and that first 7″ but “The Beat Goes On” and that split with First Blood (Would love to see a proper recording of the “Eye For An Eye” version done live at WERS! though) don’t get many spins in this house. For me things really got interesting from the “Peace On Earth, War On Stage” 7″ and onwards.

So now the record is out and everyone’s talking about it… And surprise, surprise, opinions are all over the place. A typical case of hate or love it I guess. In a way I get what people mean (aside from the idiot complaining it’s only out on vinyl…). No, it’s not perfect. No, the singing isn’t spot-on on every track. No, I don’t care much about the interludes either. No, it’s not the Blacklisted you expected (if you only listened to the first releases that is). Hell, I can even understand people who say they don’t like the artwork.

But fuck, from the first time I heard the first song I fell in love with this record. The energy, the desperation, the sheer emotion, the whole atmosphere in these tracks…. And those lyrics! I was at work when I first listened to it, but I couldn’t help myself but listen to it on repeat for atleast 3 times. I had to remind myself that I was at work and stuff needed to get done. I was hooked.

One name that immediately came to my mind while listening to this record was Nirvana. Their influence was already apparent a bit on “Heavier Than Heaven, Lonelier Than God” in tracks like “Wish” and the title of the record (“Heavier Than Heaven” was the name of a tour they did with Tad in ’89). One this record it’s all over the place though. Not only the sound of the record reminds me of “In Utero” a bit, the breaks and solo in “Everything In My Life Is For Sale” for example could have been lifted straight from a Nirvana song. Just to be totally clear, that’s a good thing in my book.

I could go on and on about this record and describe all the little parts that I love about it, but I suggest you check it out yourselves and make up your own mind (if you didn’t already). No matter what others say or think, “No One Deserves To Be Here More Than Me” ended up in the top of my 2009 yearlist. Blacklisted have stepped out of their comfort zone and did something different. Something refreshing. It’s not ground breaking or never done before, but for a hardcore band it’s pretty ballsy and I love it. I can’t wait to see where this band is going next.