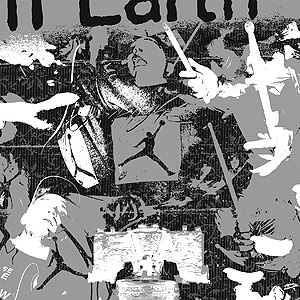 Blacklisted. Let’s see… I really liked their first releases, the demo and the “Our Youth Is Wasted” stuff. In hindsight I didn’t like “The Beat Goes On” as much as I thought at first though. Especially when comparing it to those first releases. The singing just didn’t do it for me, aside from a song or two. When I also saw a pretty bad show @ the Reflections Fest I kinda closed the book on the band. Heard they were splitting up and that was that. At least that’s what I thought…

Until I heard their WERS radio liveset. I REALLY liked the singing. Songs like “Eye For An Eye” were sung. No screaming, singing! Man, way better if you ask me. They also played a new song “Setting Sun”. Loved it. Some months later “Memory Layne” was put online. That got me really excited about Blacklisted again. I needed to pre-order that damn EP right away. So I did.

Fast forward to last week. The pre-order package arrived and I have been listening to it a lot. And…

This 7″ is easily the best Blacklisted release so far and another yearlist candidate for sure. There, I said it… It just is.

In case you worried: while there is some really melodic singing they still sound like a tank running you over musically. And yes, there’s still enough screaming as well. Like in “Ivory Tower”, the song they start with. The heaviest song on the record. Next up is “Memory Layne”. The song they put online, smart choice. It’s like a bridge between the old and new stuff. Starting off fast and heavy it then turns into this great grooving song. “Canonized” has some great Only Living Witness (check that band out) influences going on while it still sounds like Blacklisted. “Setting Sun” sounded great on the live set but this recording easily blows it away. A great way to end this EP.

What else can I say? The artwork is really cool, foldout cover/poster idea. Lots of black/white/grey imaging done by Jake Bannon. Looks different from his usual work for a change. The sound on the record is just what I expected from Blacklisted. Heavy, but clear. Oh and they deserve some credit for the title as well. “Peace On Earth, War On Stage”. Nice.

All in all I’m just glad Blacklisted are back with a bang. Now I’m just REALLY looking forward to the full length and I can’t wait to see them perform these songs live.