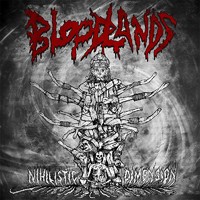 In Finland new bands always arise out of nowhere. With members of Ratface and No One Is Safe there is Bloodlands. They started in 2013 and are now releasing their first album titled ‘Nihilistic Dimension’. An album that contains 13 songs of grooving Metalcore in the vein of 100 Demons mixed with the Brutal Death Metal of Dying Fetus and Dehumanized. The album is only lasting 23 minutes which means short songs. In this case less is more; the songs are to the point and in the end you are hungry for more.

A quote from Nietzsche is included in the booklet: “Man is the cruelest animal”. That’s not a lie; the beasts in Bloodlands provoke you with aggressive and brutal music you cannot stand still to. The band has recorded the drums and guitars together what adds to the atmosphere and groove. Still the songs are very tight played as you can expect from experienced musicians which they are now.

Before you noticed “Stormbringer” is already on; started as a slow banger it turns towards a technical Dying Fetus part and ends with groovy metalcore. Before this song we already heard the fast “Manhunt” and the groovy “Visions of Violence”. The band is constantly playing with dynamics in the songs that follow without being weird. Catchy grooves are mixed with blast beats and plain simple hardcore parts or a short solo arises in the brutality.

Sometimes an intermezzo is played before the beast goes loose again. You simply won’t get bored with Bloodlands. The growling hardcore vocals might be a bit the same; the band solves this issue with backup vocals from Juide from Worth the Pain and the screams of Ulti Make in the middle of the record (“Enter the Void”).

People who like their Hardcore and Technical Death Metal groovy should definitely listen to Bloodlands. Three songs can be heard here; ordering the album can be done here.

Fresh blood is always welcome at the crosspoint of both genres; ‘Nihilistic Dimension’ is the perfect crossover.