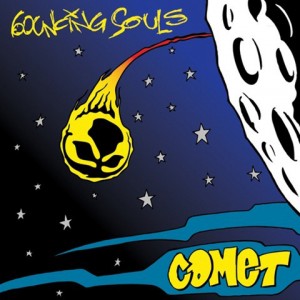 The Bouncing Souls are still playing the same catchy melodic punk rock. A song like ‘Coin Toss Girl’ could have been on The Gold Record or How I Spent My Summer Vacation. The end of that song has some great guitar parts which do remind me a lot of Bruce Springsteen. Which isn’t a surprise since the Bouncing Souls are from New Jersey as well.

And Comet has more songs like that. The band never reaches the same level as on the last three records they did for Epitaph though. There are some things about this record that I find kind of dissapointing. One thing is the lyrics. The Souls have never been a band of intellectual lyrics but the band managed to touch upon some current issues on previous records. I miss songs like ‘Letter To Iraq’.  Or the more introspect yet real subjects on Anchors Aweigh. And do we really need another Bouncing Souls song about the radio? I guess the band thought so and they came up with ‘Static’.

With ‘We Love Fun’ the band lyrically is back on the same territory as on their earliest material being just a song about having fun and wearing funny pants. I know you can have fun if you get older but to write such a simple and shitty song about it?

On ‘Infidel’ the band takes on a sound much like the most prominent punk band ever to come out of New Jersey: The Misfits. And while it would be nice on a compilation or as a b-side it’s kind of misplaced here.