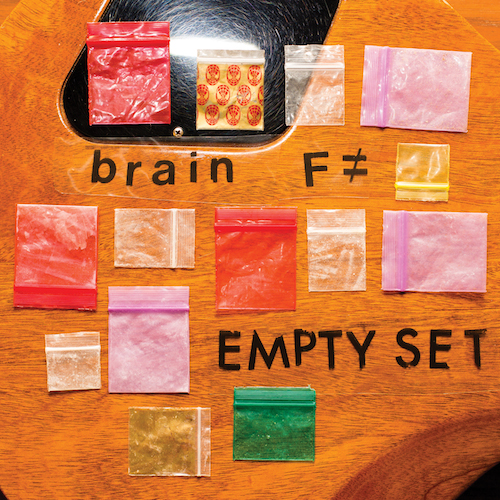 I’ve wondered for quite some time how to pronounce Brain F≠. I really had no clue whatsoever. And now I know. As you can guess my life will never be the same again. Allow me to share this little piece of life altering information with you: apparently it’s pronounced Brain Flannel. There, that’s it! Now you can actually tell your friends which band you’re going to see (so you don’t have to come up with silly excuses like “I’ll text you later, right?”).

No that we’ve got that out of the way, let’s have a look at the second album of Brain F≠ (I’m gonna continue writing it like this, I find I’ve grown attached to that ≠ thing). I listened to Brain F≠’s debut “Sleeping Rough” a lot. At first that album was just a bunch of noise, but after listening to it a couple of times the catchiness of the album really came through. I was curious what Brain F≠ would come up with for a second album. And after listening to Empty Set a couple of times I have to conclude: it’s more of the same actually. Which is a good thing! They still serve slightly chaotic, but very catchy garage punk with dual female/male vocals. The songwriting is a bit better than it was, as this is even more catchy than Sleeping Rough. But we can’t only blame the songwriting skills of the band for that. This is also due to a much better production. A big part of what makes it hard to really get into Sleeping Rough is the muddy production that makes it hard to really hear what’s going on. Now, don’t expect a slick Bon Jovi production on Empty Set, but the production is definitely way better. All instruments can be heard clearly this time around.

One of the biggest strengths of Brain F≠ is singer Elise Anderson. She sings and talks her way through these ten tracks in a very special way. At times it almost sounds like she would like to be somewhere else or is just bored. Somehow this works out really well. Nick Goode on the other hand sounds much more focused. The two work together just brilliant.

I have to admit that I have a short attention span when it comes to this type of music. Brain F≠ doesn’t waste a second and rumble through ten tracks in only 19 minutes. Every song is pretty up-tempo which is a good way to keep me interested. In fact, they warn me to keep focused in the title track singing “Stop being so damn bored” a couple of times. A bit unnecessary as I wasn’t bored for one second during the playtime of this album…