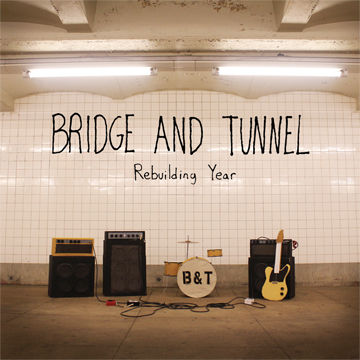 I’ve heard their name before, but I never heard a single Bridge And Tunnel song until I was send the promo of this record on No Idea Records. With a full lenght in 2008 and an EP in 2010 they’re not a new band though, so I’ll apologize in advance of not being familiar with their previous material. A bit of Googling (research anno 2011) learned me we’re dealing with ex-Latterman members amongst others. So if you’re into that, take notice. Aside from that I’m going in with a clean slate for a change. Will they win me over?

The minute I pressed play I’m hearing the melodic punk rock with a raw edge that’s getting more popular every day lately. And I don’t mind that one bit. They do stand out though. Diversity is the word that kept popping up while listening to this record. The record is really diverse. Not only in the use of the vocals (they have a female and a male vocalist who sound awesome together). Mellow songs are being interrupted with a song like Outgrowing Pains, which is just brutal. Instead of being melodic with a raw edge, it’s really raw with a melodic edge. Something I didn’t expect at all, after hearing the first two songs or when you compare it to Hands. It’s almost unreal they’re on the same album. A nice change of scenery though, it keeps you interested. And that’s exactly what they did until the end of the record. They kept me focused, they kept me listening. In this day and age of doing a zillion times at once and having an attention span of 2 seconds, that’s quite an achievement in itself.

I also need to mention the explanations of some of the songs in the booklet. I always love when a band does that. Hopefully it reminds people that this scene of ours is more than just music. With a song like Harder Pill To Swallow touching upon the American healthcare system for instance, Bridge And Tunnel doesn’t need to be reminded of that.

All in all this was a great introduction to the band and they won me over without a doubt.

PS> One question though: What’s up with the paper mache instruments in the booklet though?