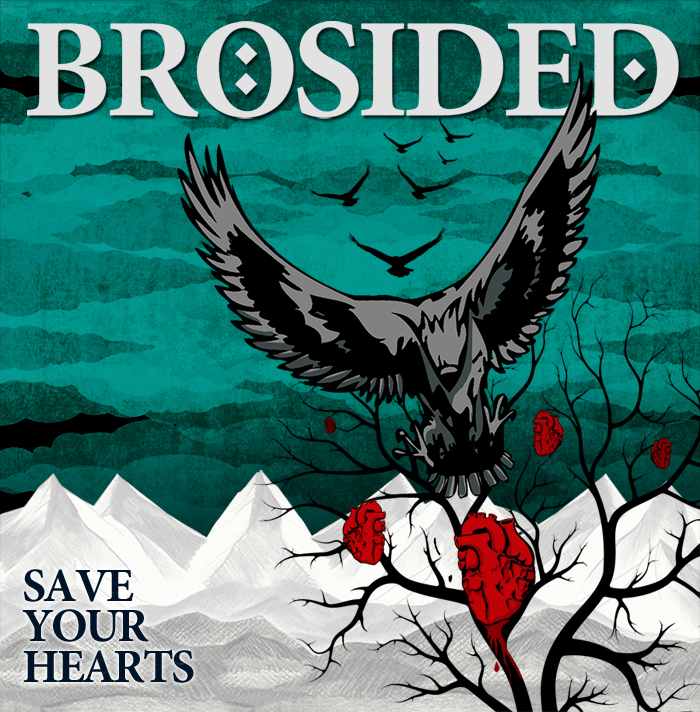 This band comes from Vilnius, Lithuania. Not known for it’s dense hardcore scene, this band has managed to play shows in their own country, but also abroad, mainly in Eastern-Europe. Brosided recorded this EP in 2012 and self released it. Save Your Hearts is not the first release by the band, that has been around since 2007. The sound is somewhere between melodic hardcore and punkrock, with a mellow tone to it.

It’s clear that you can hear influences from the small national scene in the sound of Brosided. Bands like Bora and The Analfists have clearly left their mark. There is also a touch of the likes of More Than Life and Have Heart to the sound of these guys mixed with a little bit of that poppy vibe. They never end up sounding like Atreyu or A Day To Remember though. Being a bit familiar with the Baltic scene in the more northern two countries, I am getting the idea that it’s way smaller in Lithuania with just a few bands worth mentioning. That tells you a lot about the work ethic that a band must have to achieve anything. There are no labels, no big bands touring there (hardly) and no one really seems to hear you. For example, the bands Burn Still and O.R.G.A.S.M. from Estonia suffer from similar issues.

The band sounds full of fury and energy on opener ‘Animal Wrath’. It kicks off with shouted vocals blurted out, while a rhythm is played that sounds a bit like a black metal blast beat sequence on speed. A mere 37 seconds later this opening song is done already. I’ve been informed that the vocals on ‘Perfect’ demonstrate a rather obvious accent, but the question is, do you really hear that midst the hectic punkrock sounds. The high paced rhythms sound raw and unpolished, giving it that raw edge that it needs to escape sounding poppy. For some reason they remind me of Downset and Death By Stereo. Gritty, melodic hardcore, ‘Kids Forever’, as Brosided puts it (accompanied by plenty gang shouts).

They also manage that agonized, emotional sound of an aforementioned More Than Life or Modern Life Is War on ‘Confirm My Death’ and a groovy vibe on ‘Crestfallen Heart’. This song is energetic and full of an upbeat vibe. Granted, the English is not always top notch, but it’s no hindrance at all in listening to their music. It becomes most clear on ‘City Faces’, which ends the record. The accessibility of English makes it the easy choice and using ones national language is not always the solution so as long as you can overcome that, you’ll be fine.

Brosided was nominated for the T.E.T.E. award for best punk band in 2012 and in 2013 this happened again. In my opinion, not something altogether surprising. Check them out, if you like them the record is up for downloading.