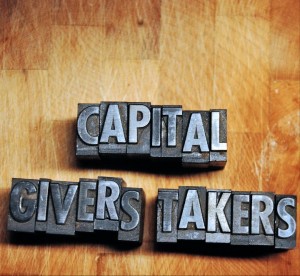 It’s that time of the year where every movie on tv features a jolly old guy in red, people have a tree inside their house and go crazy on decoration and end of the year lists are being made. If there’s one thing a band should never do it is releasing a record in the early weeks of January. However great the record might it’s likely not to end up on any best of …. list. Capital’s Givers/Takers is one of these records I would like to save from that fate.

I remember when Givers/Takers came out online in the second or third week of January. Damn, it made me all excited about a new year with new music. However when putting together my best of 2011 list, I didn’t think about including this one, untill I stumbled upon the record on my computer.

Givers/Takers is the second full length for Capital. The first one, Homefront, was released on Revelation and is pretty much overlooked by the hardcore crowd. Capital are a melodic hardcore band from Long Island and play the old fashioned style. Think Kill Your Idols, Avail, Minor Threat. Vocalist Tommy Corrigan used to be in Silent Majority (check that band out as well). So if you like that kind of stuff Givers/Takers is the record of 2011 you should check out and probably will find yourself putting it on your yearlist as well.