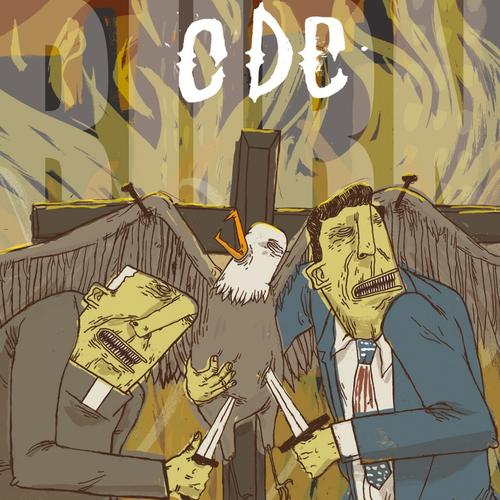 Over the last 2 decades, Philadelphia, and the wider state of Pennsylvania has shown itself as a fertile breeding ground for alternative music, particularly hardcore punk, spawning well known outfits such as Kid Dynamite and Wisdom In Chains, and more recently the likes of Blacklisted and Cold World. The establishment of This Is Hardcore fest has certainly done wonders for the local scene over recent years, along with the dudes from Wilkes Barre and their many interchangeable member bands, but who can say why so many notable bands have come from the area already? Perhaps it’s Philly’s proximity to other major east coast scenes, or maybe there’s just something in the water.

SWNK readers who’ve been around for a few years, might just remember CDC, one of Philadelphia’s more recent, and lesser known exports. The band first started to garner attention in the mid to late 00’s, their brand of what I will chose to call beatdown driven tough guy metal being particularly prevalent among the younger members of the hardcore scene at the time. Their revolving door line up based on members proximity to any given show the band were playing meant the band managed to tour the US and Europe a fair few times, and meant you could never be quite certain which incarnation of the band you were going to see. In a relatively short time, the band built a fearsome reputation for chaotic live shows, though the tough guy aesthetic was tempered somewhat by a distinct sense of humour (for example, CDC was acronym for a different thing every time, depending who you asked and when, probably the most frequently used being Cool Dudes Chillin). However, by late in the decade, the band seemed to have run out of steam, and quite simply, stopped.

Imagine my surprise then, after a few years of inactivity, to notice this record on SWNK’s review list. Intrigued, I decided to investigate a little further, unsure if this was the return of CDC, or simply a re-release of older material by Get This Right records. Much internet trawling has left me still unable to confirm if the band are playing shows again, though I will say I have definitely heard much of the material on this record back when they were more active. Moving on to the release itself, things are a little different initially, the artwork being a departure from CDC’s previous efforts (where are the Knuckledusters, Diamonds, Baseball bats?!). Depending on your outlook, this move away from the ‘wigger-core’ aesthetic could be a good or a bad thing, but beyond this, it seems CDC haven’t felt much need to change the recipe. First track on the album ‘Ten Amerikan Days’ sets the tone for the rest of the record, assaulting the listener with a low pace collection of metallic beatdowns that, whilst far from revitalizing a sometimes stagnant genre, are certainly satisfyingly heavy. The decision to include a barrage of samples on the intro has made the opening of the record a little too ‘messy’ for my tastes, though I will say I wholeheartedly support more bands having shotgun blast samples before beatdowns. Things continue in much the same vein throughout Burn, the pace marginally increasing for a moment on tracks such as ‘Ghost Writer’ before being abruptly broken up by yet more beatdowns. There’s a chunky lo-fi guitar tone that I like throughout, giving the record a rough and ready sound that suits CDC, although the vocals are sometimes a little over the top and grating. It would be nice to see a little more experimentation with song structure, I think too. However, it’s nice to see a band playing this kind of music, that hasn’t fallen into the trap of mixing everything to sound polished and expensive, as I find it often detracts from the raw aggression of the music.

Overall, Burn is a competent release, that whilst I think it could have been improved with some more adventurous song writing and more new material, is sure to go down well with people who already know what CDC is/was about. If you’re a fan of bands like Stout and Trapped Under Ice, or even that new breed of garish Slam-death-wigger-metal-core that’s been coming out of Western Europe over the last few years, there’s sure to be a beatdown for you here.

Label: Get This Right records