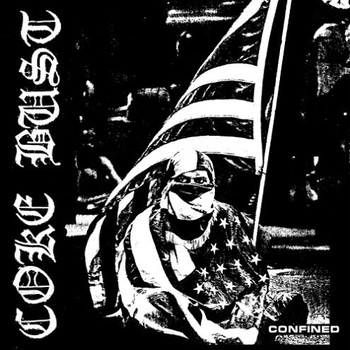 Aright another year has gone by and there’s a small pile of review material left. Better get some work done here as there are some great records I have to tell you about.

For the past months I’ve been keeping low when it comes to listening to hardcore. The edge had gone dull, a difference couldn’t be made and my hardcore pride was few and far between. It came to the point where I was watching documentaries on Noisey featuring Phil Anselmo and listening to At The Gates. Let’s say it were some dark months, winter etcetera. Fuck all that, I wanted some real anger and rage. Fast music with a message.

Enter Coke Bust. For the past years these guys have been touring relentlessly, releasing records, wreaking havoc whenever and wherever they could. Though Confined was released late 2013, I still like to bring this record to the attention of as many people as possible. Why? Because it’s a rager. It’s one of those slaps of vinyl that you’re gonna cherish for a long time. It’s a record to put on when skateboarding, going to a show or whenever. First and foremost it’s my to go to record when I want to vent my anger or frustration about pretty much everything. It’s hardcore in it’s pure form.