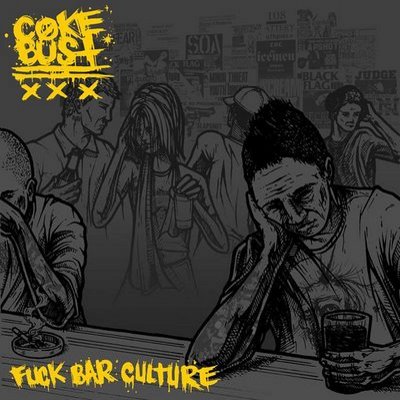 Call it powerviolence, call it thrashcore, call it whatever. We all know what it is; it’s fast, it’s heavy and it’s loud. This is exactly what Coke Bust is bringing with this 7”. Hailing from Washington, DC, Coke Bust are a Straight Edge band through and through, influenced by the likes of Infest, Minor Threat and Youth Of Today. These aspects pretty much make up the band’s sound: Lightning-fast blast-beats mixed with youth crew mosh parts, all topped off with furiously yelled straight edge lyrics.

Fuck Bar Culture is Coke Bust’s 2007 debut EP, that’s already becoming somewhat of a modern classic,  and by just reading the title you’ll realize what it’s about; a “fuck you” to the party crowd. Just take the title-track; it starts of with a great youth crew intro which transcends in a fast grind-ish part, not unlike “Violence Violence” era Ceremony, that is accompanied with some hard and intolerant straight edge lyrics. (“Sick of life/already dead/a vicious cycle of pain and regret”) It’s a short one, but it definitely brings out the mosh-lust in me. It’s quite a shame that none of the other 5 songs manages to do so.

The whole EP is pretty straight forward, every song’s fast and all the lyrics are very alike. Did I mention it was really, really fast? Coke Bust manages to blast out 6 songs in a mere 4 minutes. I personally would’ve loved a few extra songs, the EP is basically over before you even realize it.

Concluding: Fuck Bar Culture is a nice 7” but it leaves one wanting for more, I believe they could’ve replaced 7 second sonic assault “Privileged” with just more of a song. You might like this EP if you’re into Infest or older Ceremony and Trash Talk.