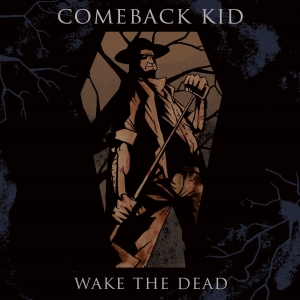 I don’t know… I really liked “Turn It Around” but on the first listen “Wake The Dead” didn’t make the same impact on me as that CD did. I thought “well, maybe it has to grow on me”, so I gave it a couple of more spins in time… but it didn’t grown on me. Personally I really miss the breakdowns and the agressive edge that they had on “Turn It Around”, those parts just gave it the little bit extra the band needed. They’re almost completely gone! On “Wake The Dead” it’s all catchier and slicker. With this CD Comeback Kid delivers you 11 songs. Keywords? Uptempo, catchy, melodic, rocking, hardcore. Best tracks? The title song because of the great sing alongs and “Talk Is Cheap” because that song still has the agressive edge I prefer. I can be short about the artwork, I like it. Dark, sober and simple but good. Too bad they only used one drawing though, a bit more variation would have been nice.

If you like your hardcore described as above this could be a CD you keep spinning and spinning, cause it really isn’t bad. I rather listen to their previous effort though.