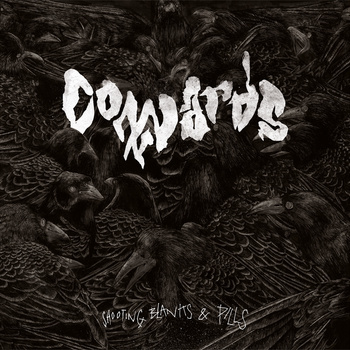 After a short ambient texture all hell breaks loose in the best Kickback tradition. Cowards is from Paris and the first song “Hoarse from the Get Go” is like Stephen Bessac himself is screaming his guts out. In this one and the next song “Last Cards” Cowards are bringing us a difficult album to digest. Think about the modern sound of Kickback, however that’s totally gone in “Scarce”. The stoner and sludge riffs bring up memories from another Paris’ band called Hangman’s Chair (one member of Cowards was / is from this heavy band).

The agression and complexity of modern Kickback returns in “Vices & Hate” and “Arrogant, Unseen”. What I like on this first release (the band has written and recorded the six songs in six months) are the riffs (both hardcore and stoner) and the raw energy. This just feels like a bunch of guys that wanted to create dark pieces somewhere between hardcore, stoner and metal. They didn’t think too much about the outcome, if it sounds sick and unpleasant it’s okay. The guy on vocals pukes out his lyrics like he has to cope with all the misery on the streets of Paris.

All the ingredients of the album are combined in the ten minutes of last song “Grand Failure” before it ends in total noise. No way this song, nor the complete album, can be called a big fuck up. ‘Shooting Blanks and Pills’ will be released on a 12” LP out in late June and is limited to 300 copies on black vinyl. People who like their hardcore/metal harsh in the French way can listen to the songs here: