Crown The Empire – The Resistance: Rise Of The Runaways LP 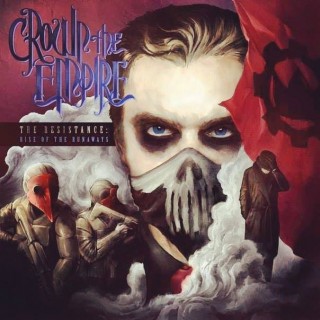 Crown The Empire know how to spark a riff. The band balance hard rock with a source of energetic pulsation, provoking the heart to bounce around without it squirming or detaching from its valves. The songs are emotionally tinged. The music will resonate on all fronts, proving that emotion is fundamental and classified. There is a substantial amount of pain ringing in the chests of these musicians, like a manic phone call.

The screams and terror are molded so well that you might think you’re in the whole messed up saga with guns firing in the background and blood and tears running down the walls like wet paint. The scenes are reckless, brutal and macabre. The darkness swirls around the instruments, they are creaks in the stairs that lead to sweet death.

The whole drama is relentless, sparking fury and a fight for clarity. The band don’t bundle up their worries much on their new record The Resistance: Rise Of The Runaways. They push them forward, they drag them from their rusted cages and showcase them for all to see. The mixture of repent and chaos is direct and unrelenting.

The album has songs that pound inspiration into the bones. Take Machines for example. It starts with a calm voice. The lyrics are compelling and poetic. Screams begin to battle hard with the evocative guitar riffs, causing an infectiousness to bubble up and explode. Second Thoughts commences with a sustainable guitar sequence. The vocals riffle home the emotive lyrics with precision.

Rise Of The Runaways is a song that begins with an electronic beat until the ferocious drums add a distinctive sound. It’s a track that has energy and fight, style and graciousness. The Phoenix Reborn is a song that just elevates with every chug of guitar and every drumbeat. The whole dramatic scintillating vibe is profound and expertly driven. You can hear the echo of pride.

Crown The Empire have created something so energetic and relentless. It’s atmospheric and pleasing, offering macabre lyrics and grizzly scenes.