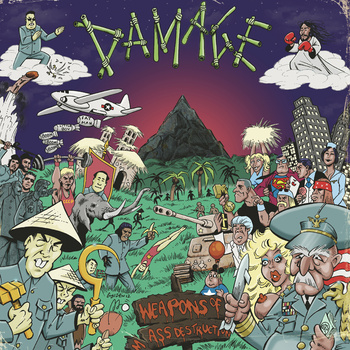 The Swedish hardcore-punk outfit Damage has released their new record titled Weapons Of Mass Destruction. A flaming ball of furious hardcore that sounds a lot like old thrashy hardcore like Jerry’s Kids, Bones Brigade and Santa Cruz. High speed and bristling with energy all the way from Linköping, Sweden. The guys have been around since 2009, releasing some demo’s and 7″es, but this is the first full length by the Swedish band.

Kudo’s for the cover that depicts a lot of crazy mess that’s going on in this world of ours, with the wink that goes so well with the fun infused kick to the balls of the establishment that punkrock likes to give. So, no waiting lines, after a short bassline ‘Keepin’ it wild’ kicks of with a burst of energy. Clean vocals make the sound pretty mellow, which is also helped by the smooth recording. The driven sound of ‘Hate’ sounds lovely, but doesn’t really put the fire in the hatred.

Songs like ‘This is our show’ and ‘Tomorrow’s Problems’ demonstrate the typical sound of this band, where Scandinavian ’90’s punkrock meets the westcoast hardcore sound. Socially aware lyrics, stop go speedbursts and the continues buzzsaw droning guitars. Primitive, emotion driven, playing meets up with high end production. The songs are short and fun, so ‘Time Flies’ is what it says it is.

‘Rising’, lasting two minutes, is the longest song on the album. The songs keep up that neck breaking pace, so ‘Holding On’ and ‘Missile Attack’ blurt right out of the speakers. ‘Welcome To The Stone Age’ is where Damage takes up a stumbling funny way of playing with some sing-along choruses. The band really takes on the oldschool hardcore sound of the likes like Minor Threat, but mellows it down. You can hear how the release of anger is close to the surface on ‘Can’t Be Stopped’. I suppose this is what makes the album pretty cool. It’s easy, fun vibe and always present proximity to the roots.