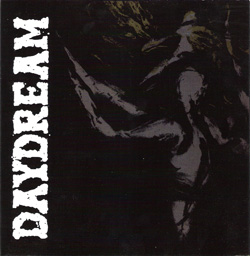 Daydream is a fairly new band from Prague in the Czech Republic. They’ve been around for little over a year and after some demo-recordings this is their first release. Right from the start it is clear this band is heavily influenced by the 90’s hardcore sound, especially Outspoken comes to mind. Being obsessed with 90’s hardcore myself, this is all good to me. If hardcore ended in 1988 for you this will do nothing for you however. This 7″ has 2 songs on it (the CD version has 3 songs on it), ‘The End Of Happiness’ and ‘Shame’. The band’s sound has that typical 90’s newschool sound that isn’t too heavy but is decidedly more metal than regular hardcore, but still without sounding metal like Earth Crisis/All Out War. The shouted vocals that lie between screams and spoken words add to the enjoyment.

The 7″ starts with ‘The End Of Happiness’ which is pure 90’s heaven. It’s got some sweet mid-tempo chugga-chugga parts, a build-up that brings Strife to mind, and even a divebomb. Lyrically it deals with betrayal by those close to you. Side B has ‘Shame’, which continues in the same vein musically. Lyrically it deals with mutual respect between sXe kids and non-sXe kids and not judging each other based on something as personal as straight edge. Both songs are great and leave me wishing for more. Even the artwork reminds of the 90’s with its abstract painting of a person. It seems there’s a ton of bands in Eastern Europe these days that are influenced by the 90’s, with bands such as Aspire, Hasp, Set Adrift etc, and I for one welcome them. Daydream might not excel in originality, and they don’t claim to be, but they do what they do really well. I hope this band sticks around and does some more recordings.

This EP is released as a 2-song 7″ on Elephant Skin Records, Caustic Recordings and Hidden Rainbows. Reason Records released it with an extra song, ‘Stranger’, on CD.