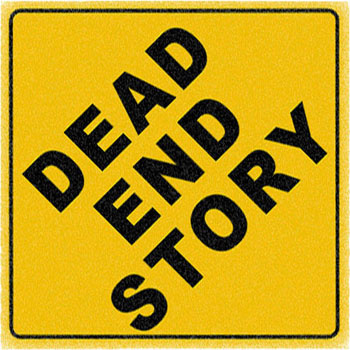 What happens if you blend Leatherface and Hot Water Music together? You get Dead End Story. Okay, maybe not as good as aforementioned bands, but you get the idea.

Dead End Story hail from Oulu, a harbor place in the north of Finland. They recently recorded a self titled EP which contains two songs. The EP starts off with ‘Workaholic’ which, I guess, is basically a song about being a wage slave. Not that much of an original topic, but it doesn’t matter that much. It’s a burden we can all relate to somehow.

The second song, ‘Yesterday’s Burden’, kicks off with some ska chords to skank to. Fast paced and easily to nod your head to. The best part of the band in my opinion are the vocals. The gritty and raw, but yet melodic vocals reminds me of Frankie Stubbs (Leatherface) his style at times, while at other moments it sounds totally different. It’s that diversity that makes Dead End Story worth listening to.

In short I can say that Dead End Story sounds suprisingly well. Suprisingly? Well, it’s not often we hear about punkrock bands from Finland. But Dead End Story makes up for that. I wonder if they can manage to improve their songwriting and come up with a more original sound.