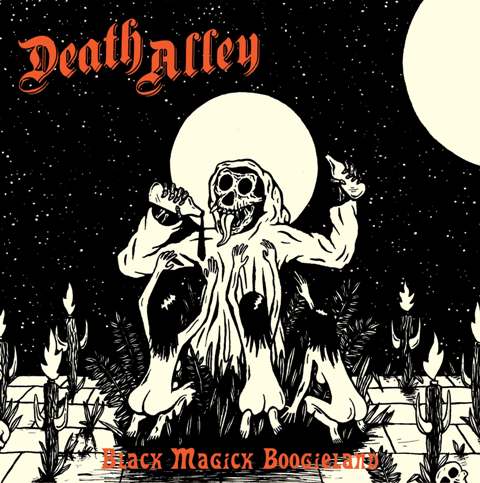 When Gewapend Beton decided to call it a day it felt (for a fan) like that was a very bad decision. But now years later it makes sense. The, for me, classics “Embryo Punks” and “17 untill we die” now sound quite outdated and could never do it for me nowadays. Now it’s the memory that keeps the record standing.

Death Alley (existing of three of these embryo punks) however sounds refreshing and in no way near outdated. The boys evolved from rambling streetpunks into gifted rock’n’rollers. During Gewapend Beton you always could hear these guys could play. Now there is even more space for guitar riffs and solos and it is amazing.

The band sounds highly influenced by the likes of Motörhead, Black Sabbath and I can even hear some Jimi Hendrix. Especially the song “Black Magick Boogieland” has some tight riffs which remembers Hendrix. Also the title could be Hendrixiesque (???). That is off course a huge compliment for a guitarist… and yep that is kind of a point I’m trying to make, the guitar work is absolutely brilliant. I’m not a guitarist so I don’t know if its technically brilliant but I’m not a guitarist so I couldn’t care less: it sounds brilliant. Black Sabbath probably could be a main influence here. And I got Sabbath high… And that is exactly my problem, I keep comparing it to Black Sabbath. They we’re unique combination of sound and songwriting  and the lack of bands making a likewise sound was filled only by themselves. Making it hard for a band to reach for a same level, but I’m too harsh by comparing these two bands.

The sound is perfect but it lacks in songwriting. “Golden fields of Love” is the best example. This is the only song on the album I can’t sit through. The musically talented cannot even hold my attention anymore. That is why personally I’d rather seen them evolve as a punkrock band then into a rock n roll band but I enjoy this as well and I know for sure that this band is gonna live up to be at least the same of a success as Gewapend Beton.

Please do check this record out and keep an eye out for Death Alley. This may not be a masterwork but you will love it. And if the songwriting could match up with the all equally great musicians there could be a masterwork in the future.