Death By Stereo – Black Sheep Of The American Dream 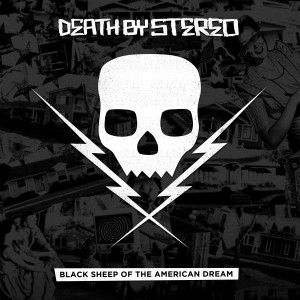 In 1999 Death By Stereo took the hardcore community by storm with their debut If Looks Could Kill I’d Watch You Die. They rapidly signed to Epitaph and released two pretty good follow ups. But when in 2003-2004 original members Paul and Jim Miner left the band to pursue other careers things went downhill musically. The band that once combined hardcore, punk and metal with political lyrics more and more became a very pale version of the genius they once displayed.

After recording with bands like H20,  Terror and Thrice Paul Miner quite possibly heard one of the later Death By Stereo releases (like the awful metal Death For Life) and decided to help his old pals by co-writing, producing and what more of the new record Black Sheep Of The American Dream.

Standout tracks on Black Sheep Of The American Dream are ‘Much Like A Sore Dick, You Can’t Beat It’ and ‘Growing Numb’. Two songs with the manic almost Mike Patton-like singing of Efrem Schultz, punk ‘who who whoas’ and the guitar solos of Dan Palmer.

Now if you listen to this record and compare it with Death By Stereo’s debut it’s not nearly as good. However if you compare 2012’s Death By Stereo with anything they did between 2005 and 2011 you might, like me, come to the conclusion that things are going upwards. There might be life after Death after all.