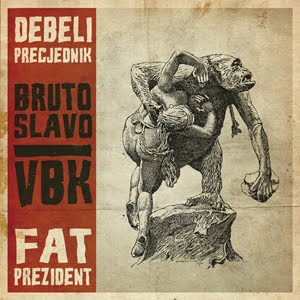 Debeli Precjednik/Fat President calls itself a highly respectable band composed of highly disrespectful individuals. For some reason I believe that Debeli Precjednik does not mean ‘Fat President’, but nonetheless. Bruto Slavo/VBK is the latest album from this Croatioan band, that has been active since 1994 and is from the Slavonia region, also known as ‘Croatian California’. The punkrockers from Osijek never stopped recording in the mean time and this record is no different to what they did before.

So what can you expect to hear from these guys? Well, they have the typical skatepunk, driven sound with emotionally laden vocals soaring over the music. The inspiration is drawn from various bands in the late ’80’s and ’90’s, which is clear from their sound. What we hear is a bit of SNFU, Jawbreaker, Propagandhi and Leatherface. Put that in the mix and we’re kinda there. The sound is pretty much down to basics, the vocals don’t sound overly polished, which gives it the uncomplex charm of oldschool punkrock that makes you want to cuddle with your skateboard again.

On ‘Music Saves’ the vocalist does overdo it with the emotion in the words that could be a bit more upbeat instead of the incredible sadness that speaks from his sound. Truth be told, the emotional vocals don’t take long to start sounding a bit annoying really. On ‘Heroes Of Today’ we hear some vocals that are close to spoken word, which work much better than the constipated sound of the main vocalist which suddenly jumps in singing “Living? It’s not that easy. All Alone….”. When the vocals move into the angry shouted vocals, Debeli Precjednik/Fat President finally reaches that sound that works good for them.

On ‘Against The Opposite’ the vocals have some more variation, which really makes the band sound more acceptable. Musically there’s not much exciting happening on this fourth album. They speed up on ‘Young And Angry Men”, but again the stream of almost crying vocals spoil the flavor of the Satanic Surfers-style riffing and drumming. Ok, so the band kinda sticks to this sound for the rest of the album, which is much more interesting when you look at the lyrics than what the sound tells us. I personally like ‘Peter Pan Syndrome’, which has some interesting passages in the music as well. It tells about holding that rebellious feeling inside you, cherish it as a Peter Pan Syndrome. Never stop telling yourself not to grow up. Good advice I think.

It’s interesting that a band that puts quite some work into their emotional lyrics, which all speak of pain and sadness in their own way, puts so many humor in their artwork. Pictures of themselves as monkeys don’t seem to mix up with the words of ‘Cavalry’, which speaks of self destruction, or ‘Bottle In The Mouth’, which I can only read as speaking of suicide. An homage is brought in the title of ‘Kinda Like Pegboy, But Not That Good’, referring to the American cult band Pegboy. Again with confusing lyrics that seem to hold more symbolism than meets the eye.

At the end of the album there are three songs in the native language, where the band suddenly kicks ass like you hoped they’d do on the previous twelve songs. Angry shouted vocals, fast paced drums and driven’ rhytms that knock you of your socks. Bruto Slavo might be nice for the emo loving punkrocker, but on VBK the band gains momentum and plays the music they are good at playing. On the last song ‘Moja Su Koljena Umorna Do Moljenja’Debeli Precjednik/Fat President shows they can really make a proper song. This band should go for their native language hardcore sound. It’s just so much better than the mediocre quality that the biggest part of the album displays.