Demented Are Go – Welcome Back To Insanity Hall 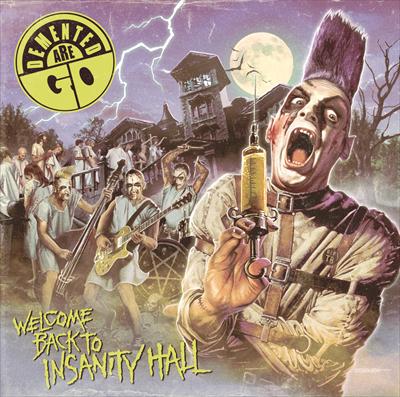 It’s hard to top an album like Hellucifernation. Simple as that. It was one of those landmark albums on which psychobilly legends Demented Are Go showed the world that the genre had evolved into something for everyone. Allthough Hellbilly Storm was a good follow-up to the landmark after their hiatus it didn’t offer as many memorable songs as their previous effort.

In that sense Welcome back to insanity hall is a return to form. Sort of. The first half of the album is filled with straight forward rocksongs that have the usual elements that we know from the band from Wales. Sparky’s vocals are great as ever and the band nicely follows in his footsteps. The songs are a little bit harder and more punk or metal oriented than before. So again a broader audience gets the chance to get into these influencial legends. The second half is where the real suprises are. A song like ‘Lucky Charm’ or ‘Dark Angel’ hold some nice details that show there is much more to these guys than you would have immagined in you worst nightmares.

There is a lot of charm to Sparky’s raw and growling voice. And I do not want to sell the rest of the band short but again he is the main star of this album. It’s great to hear that after seven years and numerous scandals he still does what he does best. So every metalhead, punk or hardcorekid should take a chance with this raw and aggressive album that holds more surprises than you would expect.