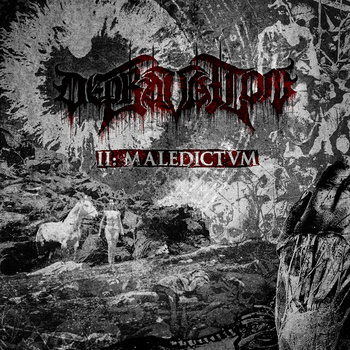 The guys in Depravation must really love metal. Extreme metal to be precise. The kind that has this sunny view on life where people only exist to suffer, either in life or in hell. Where bands paint a picture (in blood preferably) of all kinds of suffering. Well, lyrically Depravation is going down the same road. But not only the lyrics are heavily inspired by extreme metal. The music displayed on II. Maledictvm is also heavily influenced by death – and black metal bands. So what you end up with is a hardcore band playing extreme metal. A sound that was also brought to you by the Belgian band Liar.

In all honesty I cannot say I’m a big fan of this type of music. I’m not a purist musically, but this mix-up of ingredients just doesn’t do the trick for me. The main thing that I just can’t get into is the voice. Somehow it doesn’t work for me. I prefer the ordinary death metal grunts or black metal screams, I guess. The hardcore influences in the vocals always seem a bit off in this music. But it’s not only the vocals. The music in itself is falling between two stools. I find it hard to pinpoint what it is exactly that I mis, but something is not there.

Reading back what I said above, I think I’m making this record sound worse than it is. This is not a terrible album in any way. There are a couple of moments where the album really shines, the blasting Filth is an example of this. Also, the mood that’s set with the creepy intro is maintained throughout the whole album without getting boring, which is a big accomplishment on it’s own. In the end, this is not enough to save this record for me. The band is out of free downloads on bandcamp though, and is offering alternatives for you to get your download so they seem to be doing very well (and proving this reviewer wrong in the process…).

To sum it up: I’m not that impressed by Depravation. I had the same problem with Liar though, so if you were really into that band, add 10 or 20 points to my score.