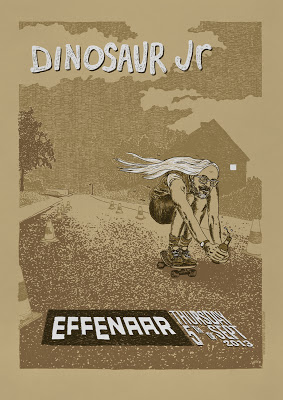 This week the Effenaar is on a serious mission to damage the hearing of as many people as possible. So after My Bloody Valentine on Wednesday it seems only logical to have Dinosaur Jr. on Thursday.

In the mid nineties I was aware of Dinosaur Jr. because bands like Nirvana and Pearl Jam dropped their names as one of their influences. The familiar purple shirt with cow was pretty much unavoidable at bigger festivals and I had Green Mind and Where You Been on tape.

However I really started to dig in the archives and open up my ears for Dinosaur Jr. after reading the chapter Michael Azzerad wrote on them in Our Band Could Be Your Life. So when the band started touring again in 2007 and releasing great records like 2012’s I Bet On Sky it was about time I went to check the trio live.

Western culture often picture God as a man with silver like grey hair and a beard. A decent, quiet fellow with half a smile on his face, just like J. Mascis and know what? He has god’s powers. Not only can he create thunder with his big stack of amps, he can also create divine melodies. Like God he’s a man of action not of words. Except for noticing that Eindhoven was the first European city the band ever played and a polite thank you J. Mascis used his instruments and voice to move the audience. Need more prove that Mascis is at least descendant from God? There was a man in a wheelchair right before me and when Dinosaur Jr. started to play he stood up and started to dance. 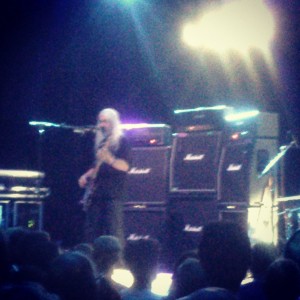 Bass player Lou Barlow is the ‘Devil’ to Mascis divinity. He does interact with the audience and sings out of tune all the time. But Dinosaur Jr. wouldn’t be the same without him as he makes the show more lively and damn he can play a song or two himself. And drummer Murph? He’s the more than solid foundation on which the religion of Dinosaur Jr. is based. He’s always spot on and makes sure foundations don’t break. 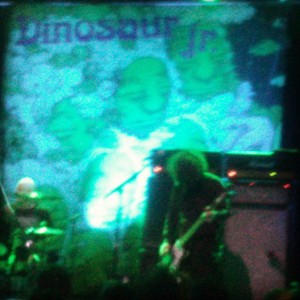 The Holy Trinity played a more than decent overview of old and new material with at least four songs from their latest creation I Bet On Sky. The audience was really mixed. I spotted (ex)-members of No Turning Back, Toxic Shock, Union Town and Cracks In The Wall in the crowd and Graham from Annihilation Time/ Lecherous Gaze on stage working as a roadie for Dinosaur Jr. Besides old grunge die hards, hipsters, young kids who forgot to bring ear plugs and old men trying out their latest Samsung device.

I’ll sure catch them again next time because like the rest of the audience I believe in Mascis.

For the more nostalgic people amongst us. Here is the footage of the show Dinosaur Jr. played in the Effenaar in 1991: