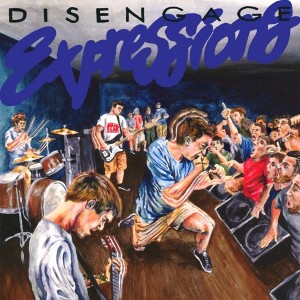 While a third wave of youth crew music still seems far away that doesn’t mean there haven’t been any great genre albums in recent years. Together by Get The Most and Rush Of Hope by True Colors have kept the flame burning. And now there’s Disengage.

Years ago every European hardcore kid wanted to go to Posi Numbers Fest in Wilkes Barre. Bands like American Nightmare, Shark Attack, Cold World and more gave their best there and went on to world wide ‘fame’. Wilkes Barre seemed to be the place to be for hardcore. Yet the city only has 42.000 residents some of whom now play shows everywhere in Title Fight. From Title Fight to Disengage is only a small step since 3 Title Fight members plus some guys from Cold World form Disengage.

From the moment Expressions kicks off I get a real Insted vibe. The vocals have the same kind of tone which I love and musically the band is somewhere between the sound of Bonds Of Friendship and  What We Believe.

Disengage lyrics deal with the typical subjects like what the hardcore scene used to mean to them as kids, and shouting that it is not too late to make a change and live up to one’s former expectations. A subject matter many bands have made songs about but the simple and catchy delivery makes Disengage get away with it all.

This album is so good it actually made me revisit Title Fight’s full length and I appreciate that one more now than I did last year when it was released. As said earlier a third wave of youth crew seems to be far away but as long as there is one quality release each year I’m not complaining and trust me youth crew hardcore doesn’t get much better than Disengage.

Labels: Triple B Records, Back To Back Records