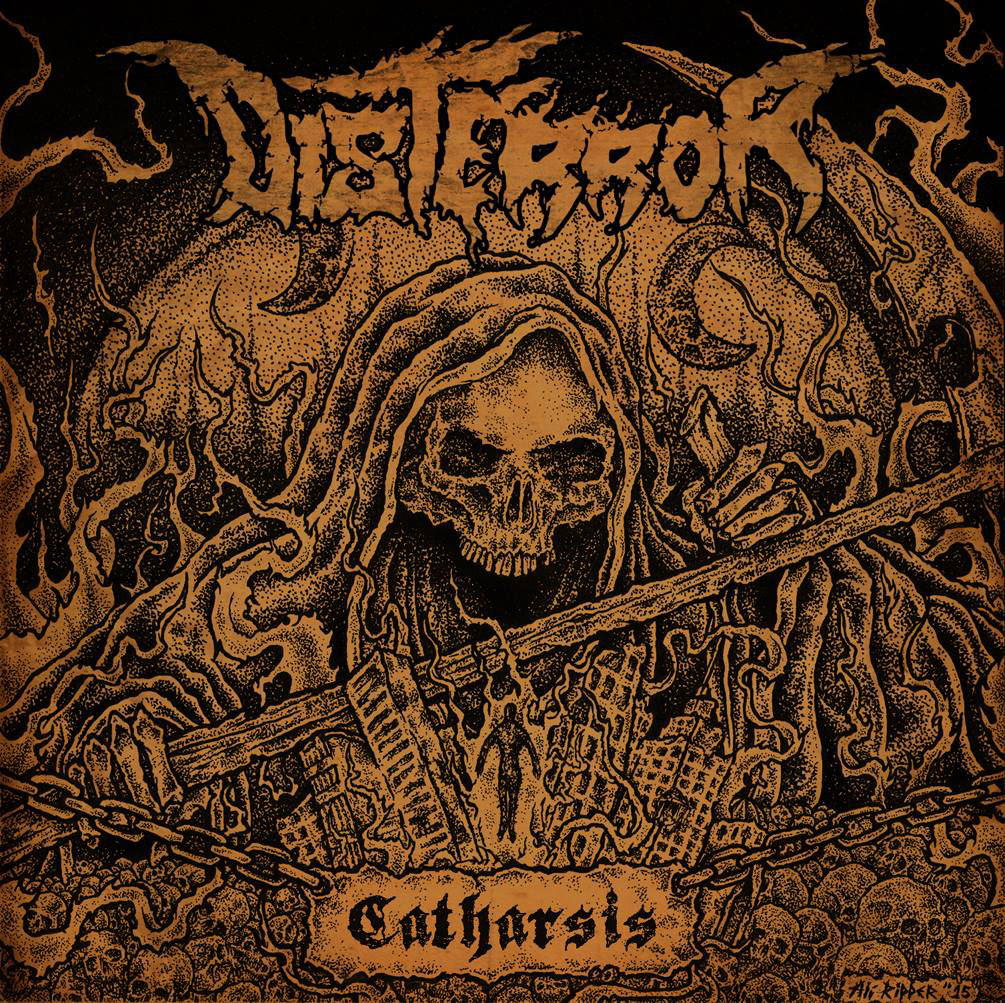 Disterror’s first full-length, aptly called Catharsis, is my first exposure to Caligari Records’ eclectic roster. From what I could gather, it’s a small label operating out of Tampa, Florida, specialized in tapes, keeping things diy and underground and, so far, excelling at what they do.

“Catharsis” starts off in an ominous way – a distant chime of bells evokes the record that gave birth to all things heavy – Black Sabbath’s first lp, obviously. I don’t know if it is deliberate or not, but it’s a nice touch, and from the moment the things kick-off it’s a non-stop barrage of heavy d-beat.

This Mexican four-piece aren’t reinventing the wheel here but you have to appreciate a well-written, sonically punishing contribution to the genre. From the aural onslaught of Amebix and early Bolt Thrower to intricate melodies of Tragedy and From Ashes Rise, Disterror are carrying their influences on their sleeves with conviction. There is also a subtle heavy metal hue looming throughout the album – those Iron Maiden guitar leads that appear from time to time. It’s an entertaining and refreshing touch to the worn-out formula lots of their peers adhere to.

The production is slick – it supplements the songs without taking away raw energy of musicianship shown. Things are edgy yet powerful, the overall sonic torrent somehow reminiscent of a well-tuned live setting.

One more thing – the blurb on Caligari Records’ website describes Disterror’s sound as an amalgamation of violent d-beat and heavy and black metal elements. While the first two elements are pretty obvious, I cannot agree on the later – there is no “blackened” prefix happening here and for once it’s a good thing. Although one could argue that the first crust outfits were in fact influenced by proto-black metal of Helhammer or Venom, Disterror have managed to avoid this latest interpolation of second wave black metal and hardcore punk. There is an unhealthy inflation of blackened hardcore hapenning lately. Disterror are not part of that wave – this is, at its core, a solid slab of old school crust punk, firmly rooted in aforementioned legacy.

To conclude this short review – I’d like to see these guys touring Europe, maybe with Victims or Martyrdöd as advisable sparring partners. Well done!