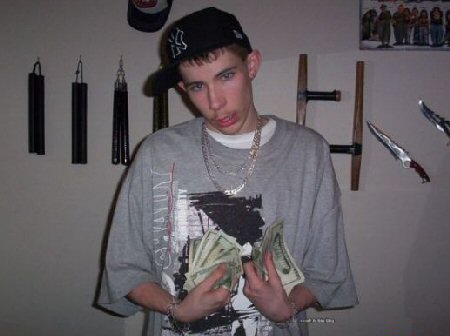 Since we liked his last column so much, we asked Mike for more. So he asked me to send him all the metalcore we had on our todo-list and this is what came out of it. Part I that is. Bands that got reviewed below, please don’t send hatemail our way. We’re just the messenger. We gladly provide Mike’s address so you can fight him.

What’s up pussies? So Pim told me my article on E-Chug was so awe-inspiring he wanted me to come back and shower you pre-pubescent plebs with more nuggets of metalcore genius, so here’s the my first column of ‘heavy hardcore’ reviews. Unfortunately, everything he sent me was fucking shit, so if you’re looking for the next Reprisal you’re going to be a bit disappointed.

Firezone – Welcome to the Firezone
Harley Flanagan has a lot to answer for. I imagine if Best Wishes didn’t exist, we wouldn’t have to worry about seeing Firezone on a hardcore bill any time soon. Saying that, I sincerely doubt these nerds will be hitting up a venue near you, given they have the force of a wet fart and the personality of a half eaten bacon sandwich. I can just about picture these thick headed dorks working up the pit trying to get 3 twelve year olds to start a circle pit at the local christian youth club, while old men sit at the back of the club drinking Duvels and wondering why 5 paedos are trying to play heavy metal, but beyond that I think these will probably remain at the ‘practice room’ stage. Please, switch it off, thanks.

Dirty East Godverdomme – Appetiet for Destruction
Apparently these are meant to sound like Arkangel. I suppose at a push I could say they sound a bit like Black Friday 29 as it’s that sort of ‘heavy hardcore’ thing but even that’s pushing it. I mean, it’s not a mess of loads of notes with some pointless piano and shit vocals. It’s just utterly middle of the road. You wouldn’t want to risk getting blood on your trainers spinkicking to any of the slow bits, the vocals are all a bit angry-euro, they’re just particularly middle of the road, repetitive, bland. Dudes should stick to computer programming and getting high scores on tetris, cos they ain’t cut out for shredding.

Now, Voyager – Seas
Touring Europe with Deal With It, there were a lot of times we ended up playing with younger bands, especially in Switzerland and Germany, skinny little whelps, wet behind the ears, etc. We never spoke to them, cos we didn’t like meeting new people unless we got something out of it, but we always got surprised the sort of kit these kids had. They’d get dropped off at the show by one of their dads and proceed to pull a full backline out the back of dad’s Mercedes people carrier. While we were gonna be playing on 3rd party Gibson clones through marshalls we bought from a charity shop (and perfectly happy with that too) these barely-adult bands had full mesa boogie set ups with glowing neon knobs and a drum kit that had just been shipped in from Japan especially. They’d have their own vinyl banner that they’d carefully put up before they played, and laid out their faultlessly designed self-released CD. We never worried too much though, cos they all sounded like wet little rich boys that just had enough money for good kit but lacked any personality whatsoever. And at the end of the gig we’d take their cables, and a tuning pedal if we were lucky. Now, Voyager might not be one of those bands, but they certainly look and sound like it, so fuck them.

That’s it for now. Next time I’m gonna listen to some stuff with Niels from Cornered and we’ll write loads of horrible shit that probably won’t get published.