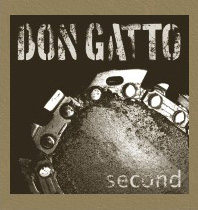 These guys from Hungary play hard, fast and short hardcore songs and have been doing so since 2009. This is the second record, titled simply Second, by Don Gatto. It’s exactly like they say, short and fast and filled with intensity.

The band is clearly inspired by whatever sounds straight to the point and powerful. They are friends with Pro-Pain for a reason (and have toured with them and Death Before Dishonor). The band was started by bassplaying singer Weisz (formerly of Chaos Of Disorder) in 2009. Guitarist Acelos used to be in Furgerokalabak (best bandname ever). Together with their drummer, which you need ofcourse, they played a lot of shows in most of Europe.

I’m not entirely sure where ‘Hardcore Babylon’ comes from, since lyrically it seems to be more some sort of upstart skapunk theme song from guys with dreads. Whatever, the song sounds blunt and to the point. There’s no high pace on that one, something that ‘Balls To The Wall’ definitely has. We can hear Gary Meskil of aforementioned Pro-Pain on this song, doing some lines along with his buddies. The song is about how they don’t stop playing until the end and that they met Pro-Pain in Rostock. Still a better lovestory than twilight, I’d say.

There’s nothing complicated on this record. The rhythm seems to be rather continuous, the band doesn’t call their sound chainsaw hardcore for nothing. So the songs ‘Fast Lande’ and ‘Beard Out’ (what?). Now, the lyrics are really not the great strenght of Don Gatto, so maybe that’s something they’d like to look into. I wouldn’t mind hearing something Hungarian, some bands do a great job in their own language actually. The song that does really get your attention is the cover on this record, which has guest vocals from the guys of Aurora and Cadaveres. It somehow only lasts just under 2 minutes, but ‘Beds Are Burning’ from Midnight Oil is definitely a great song. Don Gatto definitely entertains, but the lyrics are worrying.