Down By Law – Champions At Heart 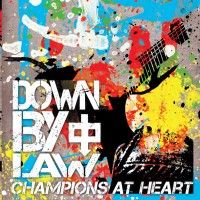 A new Down By Law in 2012? Who would have thought that would happen. For a while it seemed as Dave Smalley turned his back on this part of his career and found new freedom in his first band DYS. Well you never know with Smalley. Just as he ressurected Dag Nasty for a not so bad record on Revelation in 2002 it seems doing DYS has unleashed enough creative energy to release a new Down By Law full length as well.

I know there are people out there who think Smalley is one of punk’s black sheep with his conservative opinions some years ago. Yet to me Down By Law released at least two punk classics: Punkrockacademyfightsong and All Scratched Up!. Down By Law were probably one of the main bands responsible for me checking out stuff like The Jam and Stiff Little Fingers.

‘ Bullet’s’ the first song on Champions At Heart is old school Down By Law. The song could have been on one of the aforementioned records.

Where on pervious records The Jam really shone through as an influence, I get more of a Stiff Little Fingers vibe from this one. Especially a song like ‘Knock This Town’. Another band that comes to mind is The Clash especially in the lyrics wherein Smalley refers to Clash-songs like ‘Straight To Hell’ and ‘ Know Your Rights’.

As on all Down By Law records there are also some fillers. For instance ‘Punk Rock United’ which basically is a big name-drop of cities in the world with a punk rock scene. And there are the more folk influences which the band started doing more and more since Fly The Flag. A highlight on the record is ‘Perpetual Sorrow’ one of the few songs with Sam Williams on vocals instead of Smalley.

Champions At Heart is a diverse Down By Law record. The best song without a doubt is ‘Bullets’, the rest isn’t quite up there with earlier releases. Still I’ll be listening to this one more than the latest Bouncing Souls because of it’s diversity.