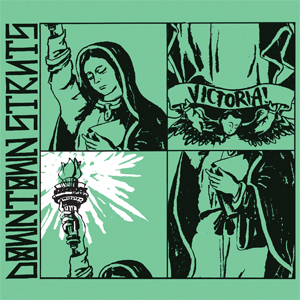 Chicago’s Downtown Struts have a lot in common with bands like The Menzingers and Dead To Me. Where the new Menzingers’ record totally blew me away, Downtown Struts have more problems holding my attention. Their previous record Sail The Seas Dry was pretty good and with Victoria! the band seems to have failed to progress.

In itself there’s not that much ‘wrong’ with the ten songs on Victoria!. That is if you like lightweight punk. But there are no dynamics on this record. The tempos and chords are all pretty much the same making each song replaceable with the next one. I wouldn’t say Victoria! is a dull record, it’s great as background music but there’s nothing memorable going on.

After hearing The Menzingers’ On The Impossible Past a band playing the same brand of music has to do better than Downtown Struts do on this release to make a lasting impression. There’s too much of the same formula going on on this record. Where Dead To Me was experimenting too much on African Elephants, Downtown Struts are playing things way too safe.