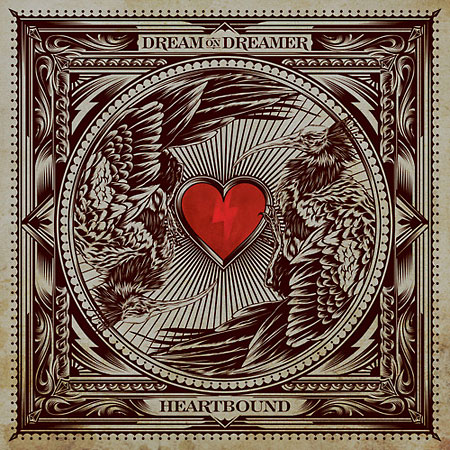 What can I say about this band? Honestly, their name wasn’t one I was at all familiar with, so after putting their debut album ‘Heartbound’ on I took to the Internet to learn something about the band. Their Facebook informs me, as part of an extensive bio, that they are a post hardcore six piece from Melbourne Australia, and that, amongst a bunch of other accolades, they have recieved 29,000 likes on Facebook. Apologies for having to start on a negative note, but I hate, hate, hate bands, heck people, that cling to these things like some sort of social barometer. I don’t care how much time you’ve spent on the internet, is your music any good and can you play a tight live show?!

Unperturbed however, I jump feet first into ‘Heartbound’ in an attempt to be less cynical. Dream On Dreamer’s music isn’t exactly what I’d think of when it comes to post hardcore. They play a mix of metalcore (the Bring Me The Horizon kind, not the H8000 kind) and melodic rock, alternating between sequences of beatdowns and singy sections which all together sounds not too dissimilar to bands like Underoath. Although the market for this sort of highly polished metalcore is huge these days, I wonder if bands like Seven Angels Seven Plagues had any idea what would spawn from the new breed of melodic, progressive influenced metalcore bands they fronted a decade ago.

To be frank, I don’t think this album is at all aimed at my particular cross section of ‘alternative’ music, so I’m not sure how insightful I can be on whether or not it breaks any crucial new ground in the genre, but I suspect the answer to that would be no. Dream On Dreamer lurch between the contrasting styles of their music in a way that seems quite awkward to my ears, the chugging beatdowns and screaming vocals sounding misplaced next to the clean singing and keyboard sections. However, I should imagine that there’s literally thousands of misunderstood young teenagers all over the world who will really dig this sort of thing, and given the bands big money management, expect to see them headlining a seven band European tour soon. Question is, how many of those aforementioned kids will just get into one of the hundreds of other bands playing virtually identical music?