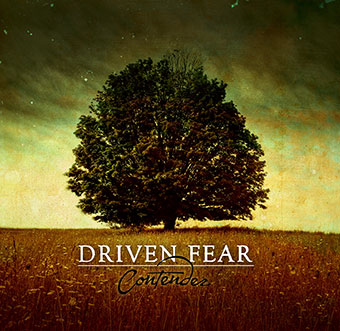 Driven Fear are from Brisbane, Australia and play fast paced hardcore that reminds me of equal parts Abhinanda and Raised Fist. I hear they are often compared to Comeback Kid too, but I’ve never heard CK so I can’t verify that. Although I’ve not heard them before, the first thing that immediately leaps out at me from the presentation of the CD is the mature approach they’ve adopted. No singalong pics and college fonts, this superbly presented digipack CD has a stunning sepia feel to it with minimal photography and no goofball photos of band members mucking about.

Musically they haven’t locked themselves into one mode either, like many bands tend to do. They are able to unleash crunch driven Refused style anthems, driving guitar parts, and passionate vocals that are somewhere between Inside Out and The Hope Conspiracy. The opening track ‘Sense To The Senseless’ is an absolute stormer, but taking a good four and a half minutes to assert itself and set the agenda. Title track ‘Contender’ has a nod to the DC sound and the instrumental track ‘The Hunt’ could even be a Sensefield song. But they don’t stray far from their well structured but frantic sounding songwriting formula for long, bringing it back round with more energetic hardcore on tracks such as the 30 second rager ‘Like The Plague.