Drums are for Parades / Sardonis – The Abyss Stares Back #3 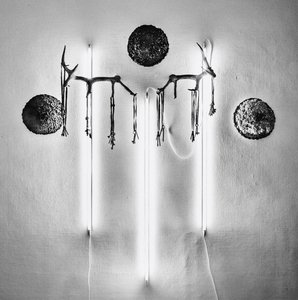 Hypertension Records is back with the third split release in their The Abyss Stares Back series. Sadly we missed the second one, but Drums Are For Parades and Sardonis have made this record an interesting listen again.

I absolutely loved the Imperivm EP and anxiously awaited new music by DAFP. The three songs on their half of the split are a bit difficult to get used to if you compare them with their previous output. Only the second song Ambulance du Ciel sounds like it could have been on Master, heavy and slow guitars over lumbering drums and buried vocals. The first song is more of an intro, but during My Problematic Relation with Doom Metal they blow the doors wide open where it comes to weirdness. Eight minutes long the band goes down an electronic road, which darkens after a minute or four, reminiscent of Pink Floyd’s earliest experiments. Definitely not new bangers from the band, but still intriguing music.

On the other half, instrumental duo Sardonis offers a more traditional take on alternative music. Three songs that quickly have you move your head. In recent times the band has forsaken the doom influences for a more High on Fire-esque stoner rock sound. The songs are nice, but the band still dwells on the safe side and becomes somewhat bland at times.

Not as impressive as the first record of the series but the experimental approach of Drums are for Parades definitely should be a reason to check them out. The Sardonis boys have done better in the past though.

Band: Drums are for Parades Sardonis