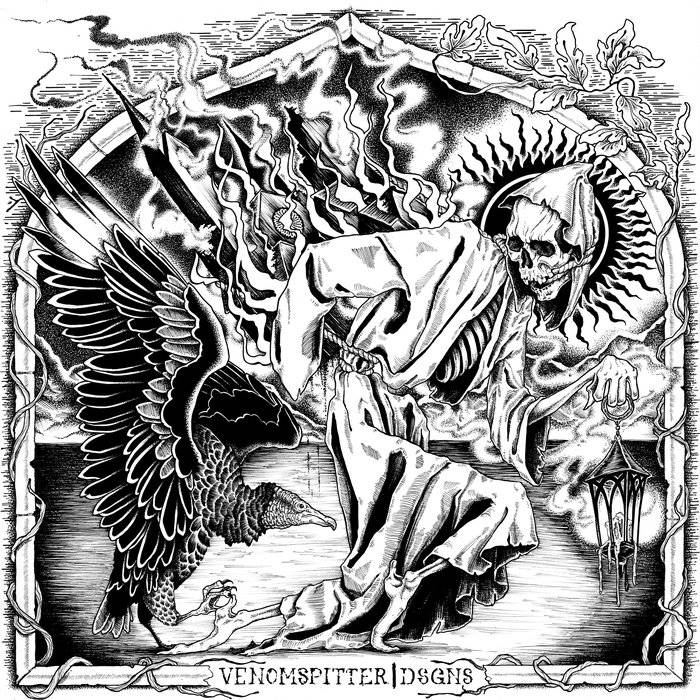 So far Coin Toss Records has proved itself as a diverse label. With loads of record labels you know what you’re gonna hear before you push play, but not so with Coin Toss. Label owner Indy has had a couple of really nice bands on his label so far, so when he mailed if we would be interested in covering his newest release, a split record with two bands heavily influenced by Botch, Coalesce and Nails, I figured “yeah, let’s give it a go!”.

First up is Venomspitter from Richmond. Venomspitter has one EP out so far, which was released early 2015. On this split they deliver three tracks of fast, heavy and dissonant hardcore. I’m stretching the truth a bit here as their third song is a bit slower (and lasts longer than the other two songs combined). I’m not sure if I would compare Venomspitter with the bands mentioned, although I do understand the comparison. The production is fitting for this type of music; the music is designed to hit you hard and the production helps to achieve that goal. I’m not a big fan the vocals, they sound a bit to high pitched to my liking and they’re a bit too much up front in the mix.

Up next is DSGNS from Austin. Last year they released their debut, Hexes. On this split they bring two new songs to the table. The production is more to my liking here. It’s heavy as a really heavy thing again. The band claims to play metalcore unmatched by the overproduced and blandly mass-generated Disney metal. Pretentious as their claim may sound, they do have a point there I must admit. On the two songs presented here DSGNS reminds me of Zao’s The funeral of God. They have that same slow (relatively slow that is), but extremely forceful thing going on. What separates Zao from their contemporaries in my opinion is the melancholy that continuously shines through the aggressiveness. DSGNS managed to duplicate that attitude and it works out very well. Especially the vocals remind me Zao (although DSGNS doesn’t use the clean vocals that Zao used on The funeral of God, which is a good thing). This is a bit of a departure from their earlier work, which has a bit different vibe going on.

This split is a treat for those into the bands mentioned in this review. I like the DSGNS side better, but both bands have done a great job here.