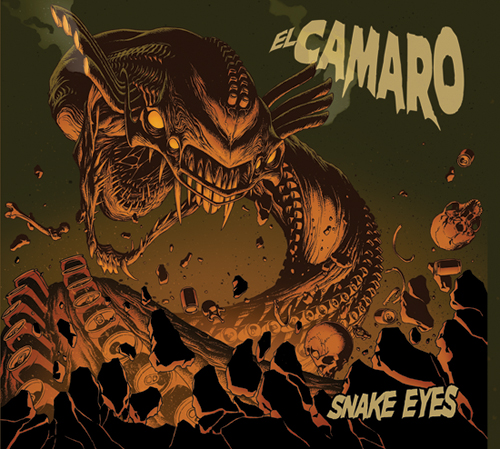 Some things in life are good, because they are simple and easy to understand. The neckbreaking speedrock’n’roll produced by the guys from El Camaro is such a thing. It’s just short bursts of fire that blow out of your speakers. The band is still working on becoming ‘famous’, but apparently has been touring the planet with some of the bigger names, like Zeke and The Hookers. You have been warned, the album Snake Eyes is one piece of fierce rockmusic.

In the Netherlands they aren’t the only band doing this thing. It’s an easy comparison with the likes of Peter Pan Speedrock and Rene SG, with whom the band from Utrecht has both shared a stage. The band named itself after an american muscle car, and that pretty much represents the full frontal assault that El Camaro is.

So it kicks of with the self titled track that immediately makes you feel like you’ve just ‘pushed your pedal down to the metal’ as they say. After some riffs, intense drumming pushes through and the song kicks off like a racing car. Shouted vocals, that are remarkably clean and melodic at times, soar over the intense music in songs like ‘Swift’ and ‘Animal Inside’. Riffs that cut like knives and a rhythm section that likes it fast pushes the band onward through songs like ‘In The Van’, which has a rugged country vibe to it.

Sometimes the band sounds like the next thing in speedrock, as their aformentioned influences, but at times a sound that reminds us of the demi-gods of hardrock Motörhead shines through, like on ‘Hot Rods To Hell’ and ‘Beer’. El Camaro sounds like something’s chasing them through their songs, up to insane speeds. ‘Passed Out’ is one that should not be playing in your car on any roads where your speed might be checked, but that’s pretty much the thing with this whole album.

Speedrock lives and it’s got enough energy left. Twelve songs that last a mere 25 minutes blast past you. Apparently their live shows are pretty insane as well, and the album only promises good things.