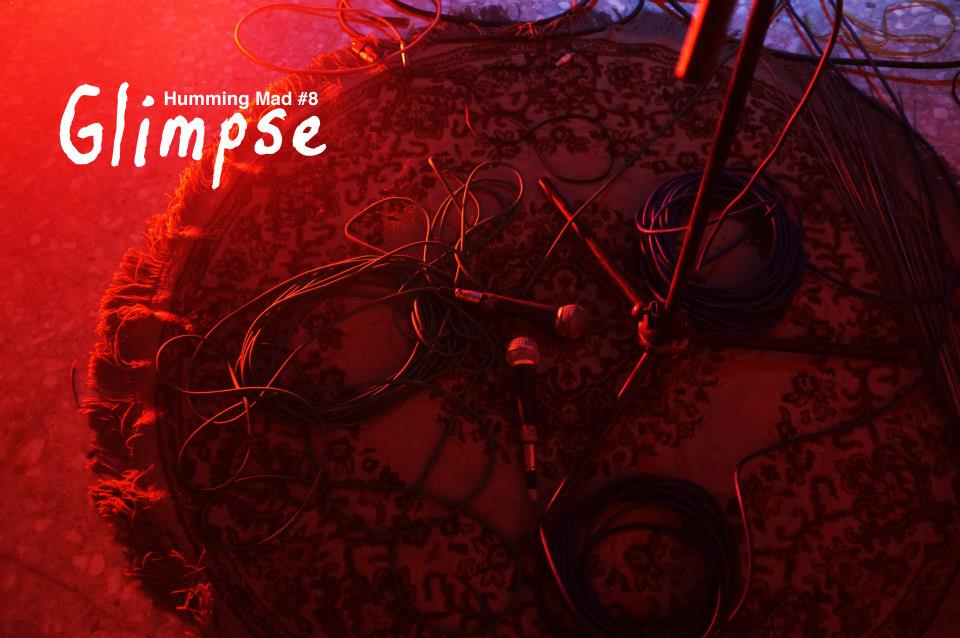 Aaahhhh. After a long period of time, I finally was able to get a free time so I can write the usual show reviews. YOUTH OF TODAY was playing here in Jakarta last month and I missed it! And when I thought that things couldn’t get any worse, the very same day I crashed my scooter into sidewalks and spent two days in the nearby hospital. After two weeks of recovering, I was ready to up my ‘Punk Points’ again… I decided to help some friends organizing DIY shows. TAPESTRY, an ‘emo revival’ band from Singapore was our first target; they were doing a mini tour and we were eager to help them playing here in our mother town. Now, I don’t normally pay much attention to emo nor do I listen to them regularly so please do mind my ignorance. For example is when I said ‘emo revival’, to be honest with you I have no idea what I was talking about but I will continue to mention funny terms like that because, well…. I think it sounds funny. Ha! Ah yes back to the gigs story, so I was helping this DIY collective group called “WE HUM” for TAPESTRY tour gigs and I noticed that most of them are young male and single (YES, this has to be mentioned because it is an important fact!!!), so ladies take notes! Most of these young folks have high dedication to keep the scene alive thus they earned my respect. At the beginning we were having difficulties finding the right venue (read: cheap venue) because apparently, Jakarta is not a friendly place for DIY gigs. Sure we have tons of bars, restaurants, art galleries, studios, and youth centers but most of them are really expensive to rent. While money is not an issue for sponsored shows, DIY shows always suffered. After lots of searching and asking we finally managed to find a large house for the venue. Say what?!that’s right fellas… House partay!! Woop Woop yeah not even a cat could scratch it. Then, the show is called “HUMMING MAD: GLIMPSE” and I was in charge in finding opening bands for TAPESTRY; not a biggie, challenge accepted! Actualy, lots of bands from various genres are willing to participate in this event but Toro Elmar (the douche behind WE HUM collective) insists that the priority is to find bands that are “Heartfelt” (read: emo). What a bummer.

Sooo… without further ado, I present to you: HUMMING MAD#8: GLIMPSE.. Hurraaahhh!!!! 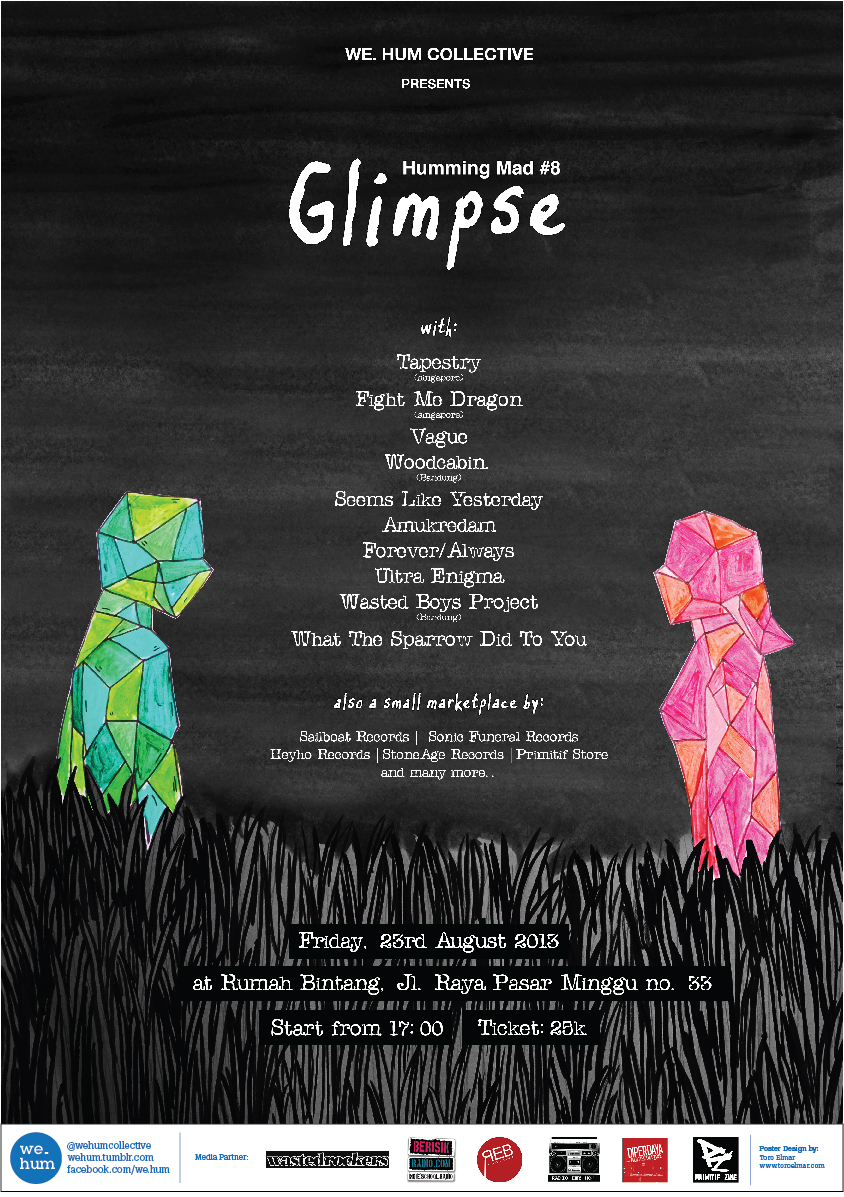 The show is held on Friday and unfortunately, I had lots of work to do on that day thus I came late. I missed out seeing WHAT THE SPARROW DID TO YOU, WASTED BOY PROJECT, and FIGHT ME DRAGON. When I arrived, WOODCABIN was playing. Again, I’m not really familiar with the whole emo/post-hardcore genre but from what I’ve heard, their music is similar to ALGERNON CADWALLADER, SNOWING, AMERICAN FOOTBALL. However, they scream too much for being a ‘Twinkle’ band so they definitely fit the criteria of ’Twinkle Core’. Nevermind the stars, we got Twinkle Core!! The singer of this band has a great pop-punk band called SATURDAY NIGHT KARAOKE and is heavily influenced by DESCENDENTS and THE ERGS. http://woodcabingemaas.bandcamp.com/ 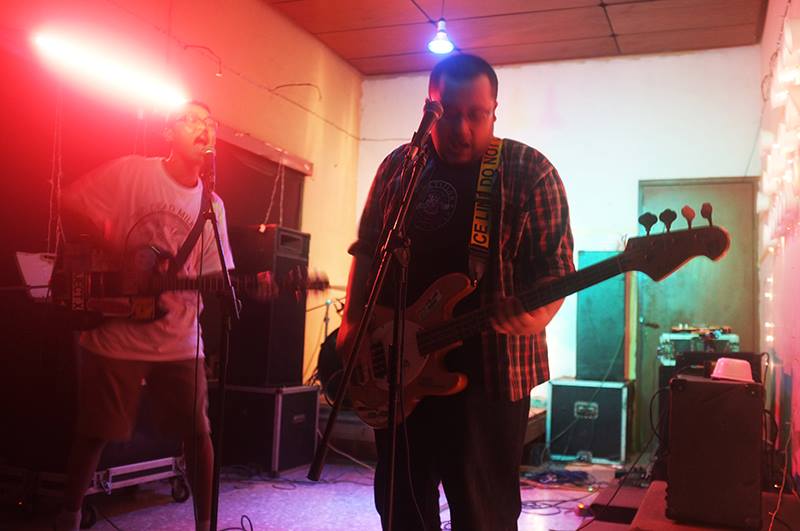 Next is FOREVER/ALWAYS. To be honest with you, I know nothing about this band; except for the fact that they love TOUCHE AMORE more than their girlfriends. That being said, it is only logical to expect them doing a cover from that band and apparently, they did…. Except that I wasn’t there to witness it because I was busy trying to buy some wine from nearby stores. https://soundcloud.com/foreverslashalways/paradise-lost/s-1qygz 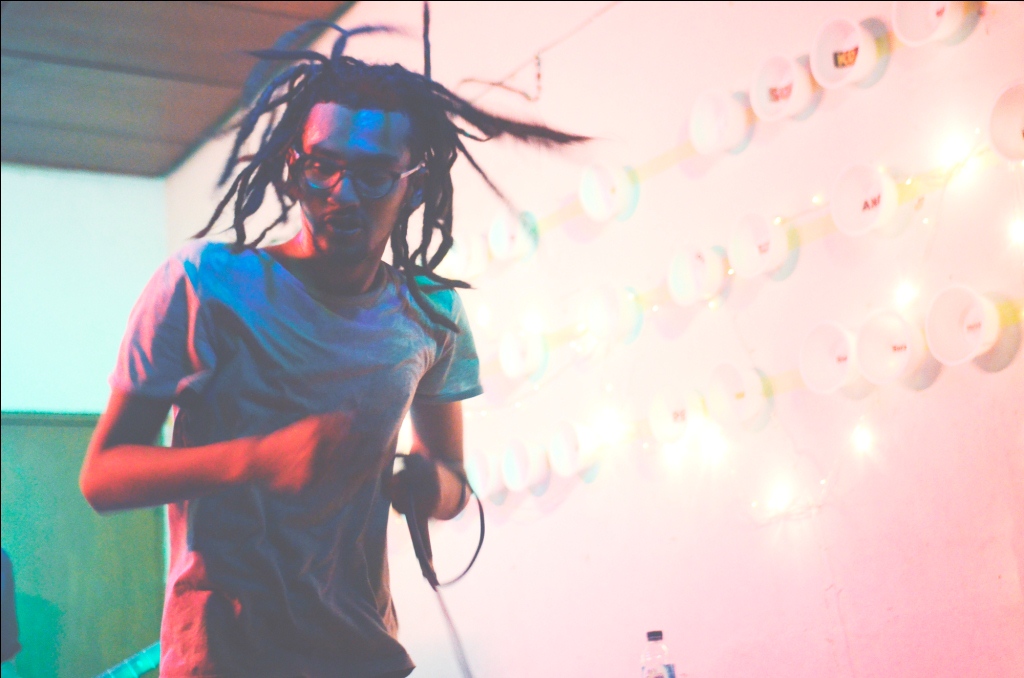 Ah! This one is my favorite… not because they have catchy songs… not because they give me free stuff, but it’s because the singer never fails to entertain me during their set. Please give it up for AMUKREDAM! He brings medicine (real medicine!! for headache!!) to the stage, he enjoys reading poetry after and before songs, and he sometimes cries after successfully screaming his heart out because his lyric truly express what he felt. Oh, one more thing: sober! Yes… entertaining, indeed. Musically they sound like ORCHID, LOMA PRIETA, AMPERE, so yeah you got the idea. http://sailboatrecords.bandcamp.com/album/first-ep 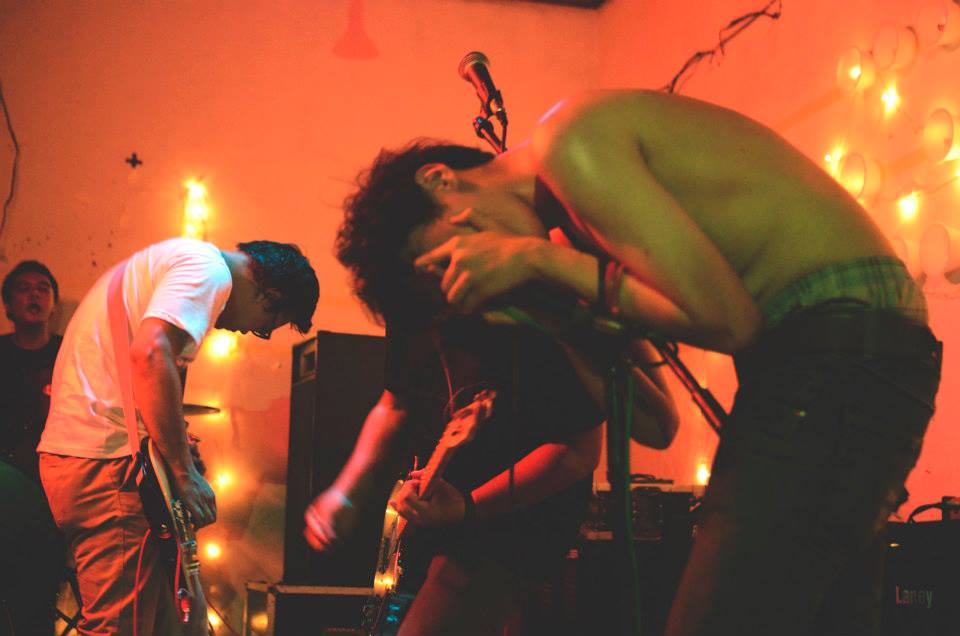 Coming up after, we got VAGUE. A three pieces band which used to adore FUGAZI and ONE LAST WISH, and successfully placed themselves as a ‘Summer Revolution’ band. Though lately, they stirred up their music with lots of noise and rock elements, slowly try to move away from their ‘Summer Revolution’ imagery. Can they make it? Will they be successfully running away from the emo/post-Hardcore label? Will they be able to find wives? If you are curious and interested, drop us an email or check out our blogs… We are planning to release our first, proper, album. OH HEY, I play in this band. Check us out! #unashamed #self-promotion #why http://yesnowave.com/tt00022/ 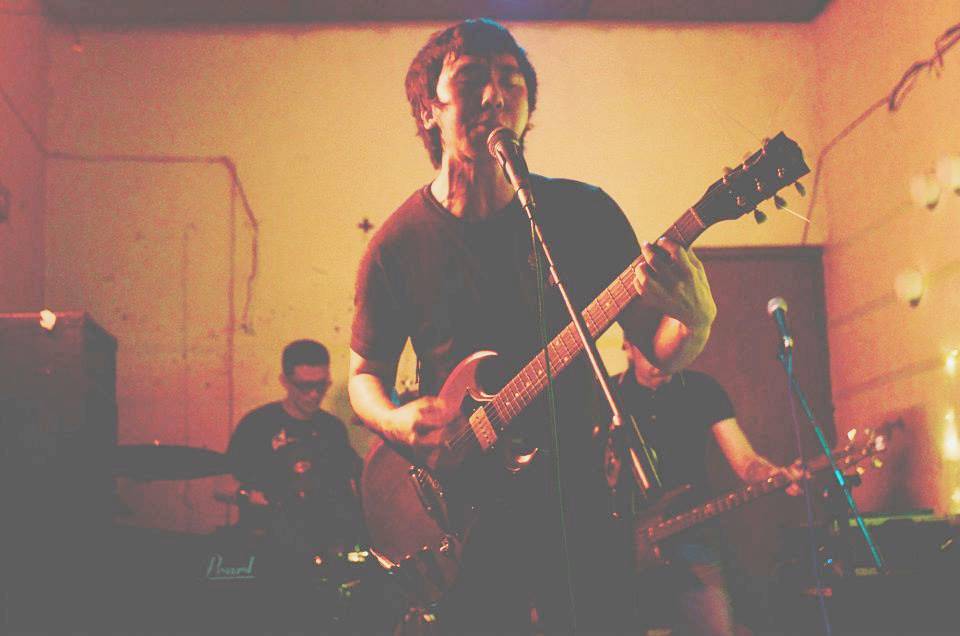 SEEMS LIKE YESTERDAY is probably the oldest and the most professional band among others from that night. They have been playing music since the early ‘00s. Remember the time when your friends were crazy about THURSDAY, THRICE, SENSES FAIL and the likes? Watching and listening to SEEMS LIKE YESTERDAY will bring you that memory. Their set was great and entertaining. They also have a professional music clip so if you are into this kind of music, do check them out on youtube. http://seemslikeyesterday.bandcamp.com/

Finally it is time for TAPESTRY, the touring band. Musically speaking, they sound like MINERAL and TEXAS IS THE REASON. If you like this kind of music, checking out their bandcamp will be worth your time. As I said before, Toro was trying to make this a ‘Heartfelt’ gigs and I did not like this idea because I believe in varieties and multi-genres when it comes to organizing gigs but meh, whatever, at least everybody had fun. Big applause to TAPESTRY for being awesome and for willingly play to our mother town without being paid. Oh and this is the good part, we actually have one more band playing after TAPESTRY, they are called ULTRA ENIGMA and no, they are not a ‘Heartfelt’ band, ha! In addition, one thing that I forgot to mention is: we also had a market. Yes dude! Market! Some independent record labels like STONEAGE records and HEY-HO records were selling their stuff during our gigs, we also had independent zine makers and individuals who wanted to sell their brands. This HUMMING MAD: GLIMPSE turned out to be better than I expected, everybody had fun, there are lots of stuff for sales and tons of ‘Heartfelt’ band to watch. No fight, no assholes, no hippies, no cops, just friends enjoying a house party scene at a ‘Heartfelt’ gigs. H-E-A-R-T-F-E-L-T. That’s my new favorite word. 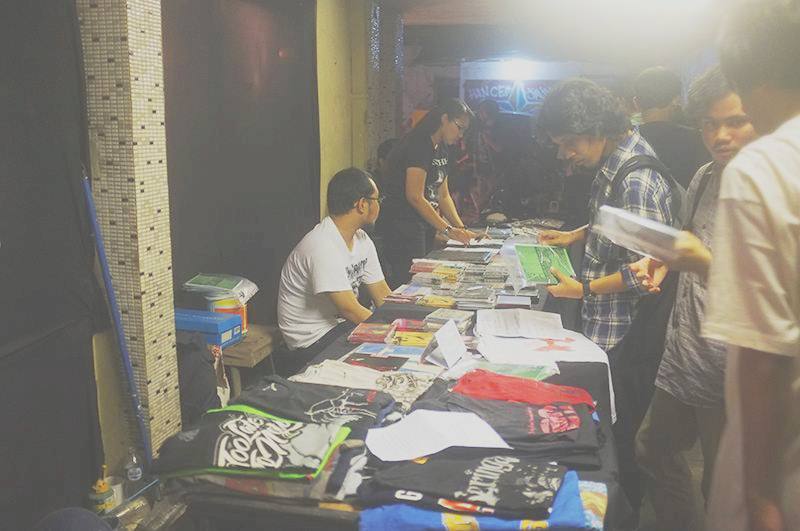 Bands: Tapestry, Vague, Amukredam, Seems Like Yesterday, What The Sparrow Did To You, Wasted Boys Project, Woodcabin, Ultra Enigma, Forever/Always