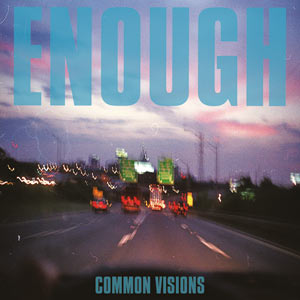 These are not the best of times for aging youth crew purists like myself. The new version of Double Cross e-zine seems to more about skateboarding than about the coolness of ’88 bands like Gorilla Biscuits and Youth Of Today. The times that every weekend I would see at least one band do a Chain Of Strength cover are long gone and especially in the Netherlands the youth crew has seem to go dull. That’s probably why Nashville’s Enough didn’t play a Dutch show on their European tour with Norway’s Evolve. Too bad cause I do think their Common Visions record is a pretty solid release. And I would have liked to see the band on stage. (And do a Chain cover?)

Enough kind of remind me of European bands like Sportswear and Mainstrike with a bit of True Colors and a shot of Youth Of Today. I can’t recall coming across another American youth crew band which sounded so European. To some this may be a bad thing, but I dig it. Not every band has to sound like Chain Of Strength. The songwriting is solid and so are the lyrics which touch subjects you might expect from a band like this. Yes, Enough has me fingerpointing across the room and temporarily forgetting the sad state of Dutch youth crew in 2012.