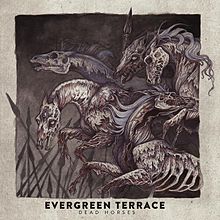 I bet there’s only a handful of people who would say, finally a new Evergreen Terrace album. Dead Horses took a while to be recorded and released. Some people even went so far to doubt the band’s existence, with founding guitarist Josh James playing in Stick to Your Guns fulltime.

Dead Horses is exactly what the band has done repeatedly on earlier records: metalcore filled with fun chorusses, chugging guitars and a breakdown here and there. But Evergreen Terrace manages to sound so uninspiring that is bores quickly, even quicker than before. Tracks like “When You’re Born In The Gutter, You End Up In The Port” and “That Dog’ll Hunt” are okay, but even those sound like weaker versions of their own songs.

I know metalcore isn’t as populair as it used to be but come on guys, throw in the towel or make an inspiring and fun record instead of this crap.