Face to Face – Three Chords and a Half Truth 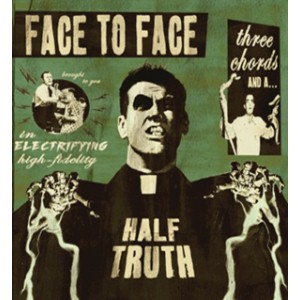 Everybody knows 90’s punk. Everybody knows exactly what kinda bands we’re talking about when terms like 90’s punk, Epifat sound or surf/skate punk drops. Even though 90 percent or so could never last, some bands somehow did manage to stick. Bands like Pennywise, Bad Religion & NOFX still are relevant. Face to Face was a band which surely was awesome back then, but in your heart you knew that this band just didn’t have it to still make it to your ears when you get older.

But these guys made a brilliant (deliberate?) ‘move’ by taking a hiatus at the exact right moment. After this hiatus they came up with a sort of new sound. A ’new sound’ in a subtle kind of way, which sounded fresh and yet trusted for new and old fans. Combined with the pretty awesome artwork, ‘Laugh Now, Laugh Later’ collected loads of positive feedback from many different types of listeners. And let’s be honest, it sure was a fun record!

Such a ‘move’, off course, makes it harder for a band to keep being relevant again. With ‘Three Chords and a Half Truth’ Face to Face tries to maintain their 2011 success. First of all the artwork looks good again though I can’t figure out what’s the theme behind the preacher and all.. But who needs a theme when it looks neat!  And that’s the same feeling when the tunes start playing. ‘Three chords..’ immediately opens with a track which sticks the rest of your day and this keeps going during the complete record until you hit ‘Jinxproof’. This is the one disappointment I have to point out. This song also sticks in your head but in a negative way. ‘Jinxproof’ sounds like the bottle of inspiration was just empty. Slow and dreary..

If you skip ’Jinxproof’ Face to Face brought you a fun record again. Okay it won’t hit like ‘Laugh Now Laugh Later’ but the So-Cal boys delivered a dozen of very decent sing-alongs. If the sun will ever start shining this summer I think this is a pretty awesome alternative between the angry hardcore & punk bands. I know I will be checking them out on Ieperfest, catching my breath during all the hardcore madness!