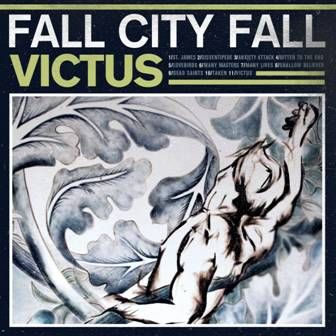 I’m a pretty straight forward guy and thus like my music pretty straight forward as well. I prefer conventional hardcore song structures: intro, refrain, two step part, chorus, refrain, two step part, chorus, breakdown, end. Preferably with an extra breakdown or mosh part thrown in there somewhere for good measure. I understand why a lot of musicians may find working within these boundaries creatively unfulfilling, but the drive to be original often results in music way outside my comfort zone. As soon as terms like ‘dissonance’ get thrown around, I usually bail out.

Enter Fall City Fall from Calgary, Canada. This band has dissonance by the bucket loads, next to weird guitar chords, numerous tempo changes, utterly chaotic passages and frantic screaming, smirking and snarling by two dudes both apparently on the verge of a serious nervous breakdown. What Fall City Fall also has is the ability to use these elements to create music this humble reviewer can actually listen to without experiencing the sonic equivalent of a Tequila hangover.

The band instinctively seems to know when they need to stop being incomprehensible just for incomprehensibility’s sake and lay on either the mosh or the rock.  When these dudes start blasting out like the amphetamine induced ADHD psychopath kid brother of Every Time I Die, like in the insane whirlwind that is Anxiety Attack or Love Birds,  I physically have to stop myself from body-checking innocent unsuspecting bystanders while running up and down the walls. Victus almost constantly ouzes this boundless energy and urgency, which makes listening to it equally exhausting as it is exciting.

At first I could not make head nor tail of this record, but now I find myself coming back to it fairly often. Don’t let the La Dispute/Touché Amoré-esque opening track St. James put you off. Fans of Converge, The Chariot and the likes as well as general lovers of frantic and driven music should check this band out. You may start randomly decapitating strangers when jamming Fall City Fall on your iPhone, but the solution for that is simple. Blame Canada.