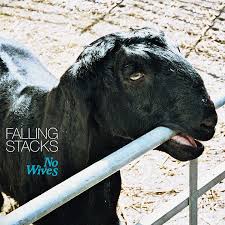 Falling Stacks is from Bristol; three geeks who have filled their iPods and Smartphone with Fugazi, Shellac and Big Black albums. Falling Stacks released three EPs and want to conquer Bristol, the rest of the UK and the world with their first album ‘No Wives’. They are punk, they experiment, they do extraordinary song structures and they like noise.

So far so good; what counts is have they written remarkable songs such as the above mentioned bands did? The answer is not always yet. The album kicks off with loads of ideas and energy making it hard for the listener what to expect. This makes the start messy and with the lack of catchy tunes, the laconic easy-going approach and remarkable vocal lines Falling Stacks will be easily forgotten. On the other hand you will be thrashed when you hear this trio raging on stage for the first 10 minutes, however it will be boring afterwards.

A changing point is ‘A Fly Would Slide’ when the high energy is tempered; enter mid-tempo melancholic (Shellac inspired) tunes together with cynical vocals. Returning patterns give the song structure and this is continued in ‘Seven Cuts’. Steve Albini should be proud of these guys. Unfortunately Falling Stacks is returning again to the messy start with the weak ‘Silverware’. Singing about dogs isn’t saving the band in the last song ‘New Dogs’.

If the band has taken more time in structuring their ideas the album could’ve been much better. Now they will be stuck at local shows in Bristol supporting touring bands and ‘No Wives’ except for friends will hang out after the show.