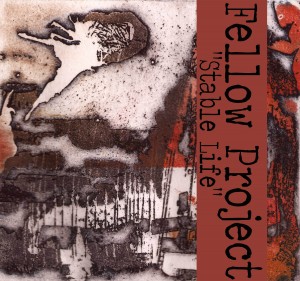 I had never heard about Fellow Project before (which is probably a shame, because this is not exactly their first release), but a mail from Jeff (Bridge And Tunnel) who helps run Answer Key Records changed that. And it totally makes sense. It’s no surprise to me this comes out on a label run by someone from Bridge And Tunnel. I’m not saying they’re copycats or anything, but they have a similar approach (not that strange considering Tia (vocals and bass) used to play in Bridge And Tunnel). Pretty much all the stuff I said about that band also applies to Fellow Project. There’s less of a brutal edge though, it’s still raw, just not brutal. Which is perfectly fine with me.

But I don’t want to be that guy, pointing back to another band the entire review. Wouldn’t be fair either, because I probably even prefer them over the band we’re not going to mention again. But that stays between us okay, I don’t want Jeff to be mad.

The song Zombie Kids, for example, got stuck in my head right away. The part in the middle where they repeat “You can take the abuse, but not the indifference” over and over pretty much sums up the quality of the entire record for me. The bass riff reminds me of Fugazi, the voice of Tia is just plain beautiful (am I’m going to drop a reference to an angel in here? That would be too cheesy right?) and aside from that I love that little line itself. For real, I skipped back to that part at least 10 times before listening to the rest of the record again. There are more parts like this on the record. Halfway through Off Track Days, the opening track for instance. Or the “Dear Mr. Mars” part halfway in Mr. Mars. Those parts were the sweet voice of Tia meets with the raw voice of Joe result in in great harmonies and are by far my favorite moments of the record.

I’m a singer, so when I listen to a record I focus on that, but that wouldn’t do justice to the rest of the band, because they have a nice groove going on. Laidback at the right moments and making the songs explode just when they need it. You know those parts that go on and on, building up (without dragging on too long)? Pretty literally in Horse Of The Year actually where they repeat “It goes on and on”, well…. on and on. They have plenty of that. And I love it.

That’s pretty much all I have to say about it, I really like this record. I suggest you check it out. I’m going to put on Zombie Kids again. 2011 is almost near the end, but this record came right in time to end up on my yearlist.