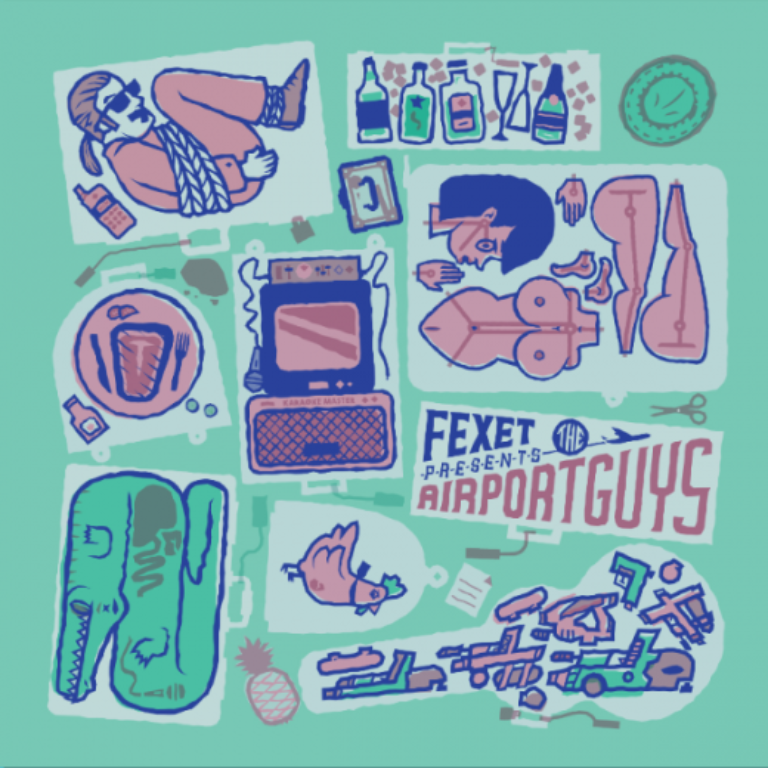 Most of you have probably seen the video of Fat Mike bullying a red haired kid on Lowlands 2010. Well, apparently that’s the risk you have to take when you’re thirteen and standing in the front row of a NOFX show. Humor? Dull? Punk rock? Call it what you like, but that particular kid started a band called Fexet and some time later he and his friends managed to meet NOFX on the airport. The ginger kid got recognized and since then Fexet bears the name “The Airport Guys”. Eventually they supported NOFX on two shows in The Netherlands, a happy ending after all.

So, now here we have Fexet’s first full-length album “Presents: The Airport Guys”. Just like their previous EP “State Of Mind” it was mixed by Bill Stevenson (Descendents, ALL, Black Flag). To top it all, the album then slipped through the fingers of none other than Joe Escalante of The Vandals, who released it on Kung Fu Records. Not bad for a bunch of teenagers, huh?

All namedropping aside, Fexet “Presents: The Airport Guys” is a solid attempt to obtain their own share in today’s punk rock scene. The young lads actually master their instruments better than most people twice their age. Catchy melodies, nice harmonies and the ginger kid bass player deserves a big high five for his subtle, groovy bass lines that add just that little bit extra. Personally Fexet’s sound in its entirety reminds me of No Use For A Name’s last two records mixed with a more modern poppunk sound and a dash of 90’s Epitaph and Fat Wreck.

The record is definitely tight and easy listening. You don’t have to like punk or hardcore at all to get into Fexet’s music, and in my personal experience that’s the only flaw. There are not much energetic outburst, flashing guitar solos, edgy riffs or exciting changes in tempo. The opening track “Way Back Home” and “Misconception” are powerful and catchy songs, but other than those I can’t remember any hooks in the other songs after the first few rounds of listening to the album. It’s not something that grabs you by the balls and tells you to get the fuck on your skateboard as fast as possible and do a kickflip while taking a sip of your beer in mid-air. No, it’s more like a cozy, gentle car ride while drinking some overpriced coffee. This record would be a good soundtrack to that.

Don’t get me wrong though, I think Fexet can reach a wide audience with their melody-driven punk rock. In fact, big thumbs up to these guys! Everything on this record seems to fit and I’m certainly stoked to hear what they can come up with on their next album. I hope next time they can get a bit more out of the box in the songwriting process and pump up the energy.

PS: I wanted to end this review with a ginger kid joke, but I figured he probably had enough bad jokes pointed his way already.