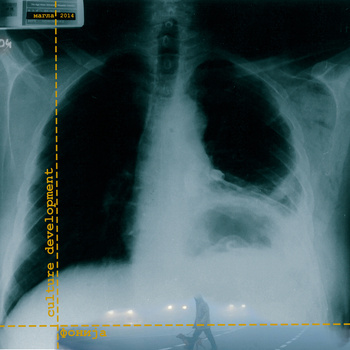 When Deni from Fonija said they would release a split album I was excited. Fonija released my favorite punk record of 2013. I was really curious if they could top Mojot Pekol. When I received this record I couldn’t wait to listen to it. Fortunately for me Fonija did not let me down. In fact, these songs rock as least as hard as everything on Mojot Pekol. In fact: this is a prime example of the saying “never change a winning team”. They still bring you punk rock mixed with some stadium rock influences. There’s the energy of punk and choruses that just need you to scream them along. As the band is still singing in Macedonian that is quite a challenge, but that shouldn’t hold you back! Fonija was kind enough to provide you with a translation of the lyrics (check their bandcamp if you’re interested). My only critique on Mojot Pekol was the usage of a screaming voice that just didn’t seem to really fit in. Well, that voice is absent on the three tracks here, which is a good thing in my opinion.

On side B (yup, this is released on vinyl as well, well done Fonija and Culture Development!) we find Culture Development. The great thing about split albums is that you get to know new bands. You buy ‘m for one band and as a bonus you get a couple of tracks from another band. Culture Development is the bonus material here and to be honest… It’s a bit of a cold shower after three great punk rock songs. Culture Development play emo-influenced punkrock. I’m not saying that’s a bad thing. Not at all. I’ve got problems with how this is executed. The biggest problem I have with the three tracks of Culture Development is the singer. Best track for him is ‘Zaletan’ (and for the whole band, actually), where he sings in his mother tongue, which really is good idea as he has quite an accent. But it’s not only his thick accent that is bothering me, it’s also his sound. His voice is very nasal and really an acquired taste. A taste that is not mine.

So, in the end this album is a bit of a mixed bag. I’m really happy with these new Fonija songs, but probably will not listen to the Culture Development songs a lot. My final judgment: Fonija: 90; Culture Development: 60. 75 for this split seems fair.

PS: these band are planning a tour, go check ‘m out!

PPS: yup, only two songs per band on this bandcamp… sorry ’bout that!