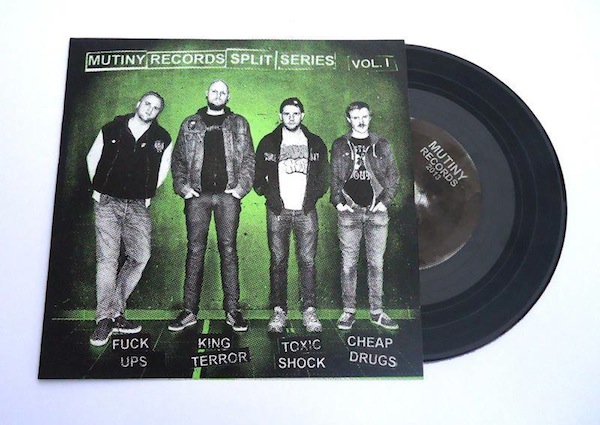 This EP shows off four bands from the Belgium underground presented by Mutiny Records. Toxic Shock, Fuck Ups, King Terror and Cheap Drugs show how to create blatant and aggressive Hardcore with some Punk & old-school Metal here and there.

First thing are Fuck Ups, a snotty hardcore band with a Punkrock edge. Corporate Dude and Artificial are good examples how energetic eighties Hardcore has to sound.

King Terror are pissed off and full of hate. Full of cynicism they start with Shit Band, a cover song of ‘We’re that Spic band’ from the first Latinos Hardcore band Los Crudos. In two shorter songs they rant about Black Metal and how to do it yourself (In Flemish ‘Doegetzelf‘).

Toxic Shock is making progression with their Thrash Metal influenced Hardcore in the Belgium heavy scene. SWNK is following the band since their demo and after their Ieperfest show I got aware of the band and impressed after a couple of songs. Don’t/Too Late is a track from the pre-production of the Daily Demons 12″. It’s a bit sloppier and the vocals are different too. The song starts off as typical eighties hardcore, has a break and continues in a crossover song. Best song of the compilation.

Cheap Drugs is ending the ride with two plain and straight forward hardcore songs including typical choirs and a small guitar solo. Nothing special, just energetic and pissed off music.

Overall this EP shows a 2014 snippet of the neverending stream of quality bands out of the Belgium Hardcore scene. It seems it will never stop which is a good thing of course.

I have no idea where to order this slab of vinyl; instead visit the bands shows, mosh and pickup a copy of this EP.