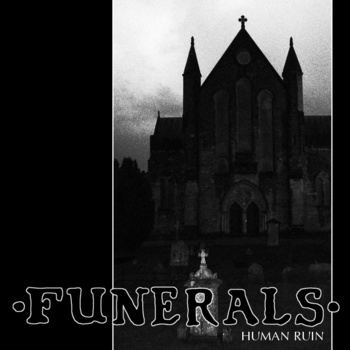 Oregon’s Funerals released their 3-song debut ‘Human Ruin’ on Halloween 2013. Exactly 1 year later it’s remastered and released on 7″ by Blasphemour Records. Like the bandname, the band’s music and lyrics are anything but lighthearted.

Opening track ‘Veins Of Black’ sets the tone straight away. A slow heavy build-up with an eery melody that moves into a heavy, downtuned riff with sharply shouted vocals expressing disgust with a friend’s drug abuse. The guitar tone reminds of Disembodied. This becomes even more apparent in the title track, which also has the vocal style of Disembodied with its mix of whispered, spoken and shouted vocals. The heavy sound continues with closing track ‘Sick Of Sun’ which adds an extra somber layer to their sound, closing out the EP with sustained and drowned out guitars/feedback and echoing growls. The lyrics to the other 2 songs are more indirect and metaphorical than ‘Veins Of Black’, but are still filled with hate, spite and darkness.

All in all, the 7″ is over before you know it (even though it’s 11+ minutes long) and I keep finding myself playing it several times in a row before I switch to another record. If originality is what you’re looking for, look elsewhere. If you want excellent dark & heavy metallic hardcore that relies heavily on atmosphere and downtuned riffs than look no further. A definite contender for my yearlist.