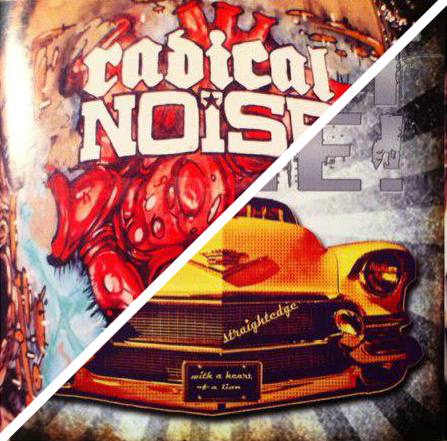 Sometimes there are moments that you are slogging through crates filled with vinyl looking for new hardcore bands. When I feel like checking out new music there’s two points that are from high importance to me. The first one being that I mostly buy a record based on what the design looks like. Design must convince me to try out a band I’m not familiar with. The other important factor of influence is what record label released the record. If it’s a label with a state of merit of bands that belong in my record collection, then I have some kind of idea what to expect and might therefore pull me over the line.

Main reason for saying this is because this split release does not live up to the above mentioned, and is therewith right away the perfect example that you should never judge a book by its cover. At the same time, the fact that people invest a lot of money, time and effort into releasing new bands is exactly what makes hardcore so special to me. Lunas records, all the way from Turkey, made this happen, had both bands record five songs each for this release and both bands even managed to play a handful of shows together.

Where Radical Noise goes for a more metal-like sound, Get It Done is all about fast and overall melodic hardcore. Great musical contradictions is what make this release an interesting combination: kids who are into metal alike hardcore, dig guitar solos and heavy riffs with alternating double vocals are able this way to find out about the catchy and uptempo melodic – and not your average youth crew – hardcore from Get It Done and vice versa. Both bands do their thing very convincing. Not to mention that both bands do songs in their native language and that Radical Noise started out playing in 1992… Yes, 1992! Very well done.

Bands: Get It Done, Radical Noise