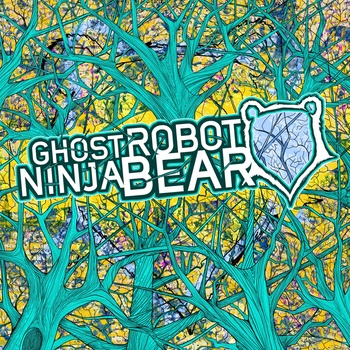 I have to admit, I definitely had some preconceived notions when I read the name of the band that is the subject of this review.  The band is called “Ghost Robot Ninja Bear”, and I think I was expecting to hear some generic recycled scream band.  Once I started listening to this self-titled record I quickly pushed past everything that I thought this record might be.  Ghost Robot Ninja Bear is a project from Oscar Albis Rodriguez, formally of the band Nakatomi Plaza.  This record has a similar indie-punk vibe to Nakatomi Plaza but is a bit more varied in style, giving the project its own unique sound.  This is a band you wouldn’t be surprised at all to see at The Fest but, their music is unique enough that they would definitely stand out among the other bands on the fest.  This record was recorded in stages at various locations throughout 2010.  Several musicians and friends collaborated with Rodriguez to create this record, including producer/engineer J. Robbins who mixed the record.  I won’t go into all of the production details of this record but if you are into that sort of thing, there are some extensive production notes on the band’s bandcamp page.

One of the first things I noticed while listing to this record is that everything sounds great.  The guitar tones cut right through the mix and are able to grab your right from the start.  As the record blasts from riff to riff, the guitar tone changes and does a nice job of complementing the sound of each song.  The other noticeable element of this record is the rhythm section.  The bass and drums on this record are tight the whole way through.  They never get too complex but, fit in well and never over complicate the songs or overshadow the guitars.  One of my favorite elements of Ghost Robot Ninja Bear, is the pacing on the songs.  The vibe of this record changes from song to song and really takes you on a trip musically.  By the time you get to “I can’t decide” the third song in, you are in a completely different place musically than you were when the record started.  This is the element of the record that really kept my interest the whole way through.

Lyrically, this record is full of hooks and is where it shows off it’s punk influence.  During the first song, “The Curtain Call” the chorus gets burned into your head.  Rodriguez’s vocals drive each song.  The gravelly tone of his vocals are very present on each song without sounding like another punk band trying to be Hot Water Music.  The lyrics on the record get repetitive at points but with everything else going on in the songs isn’t something that takes away from the songs.

This record is available from the band at shows as part of a limited CD release. The record has also been released digitally, and is available on iTunes and various other online music outlets. Ghost Robot Ninja Bear has also made the record available on their bandcamp site as a pay whatever you want download. Rodriguez will be getting out on the road preforming the GRNB songs solo during a short tour of the midwestern United States. Tour dates are available on the band’s website.