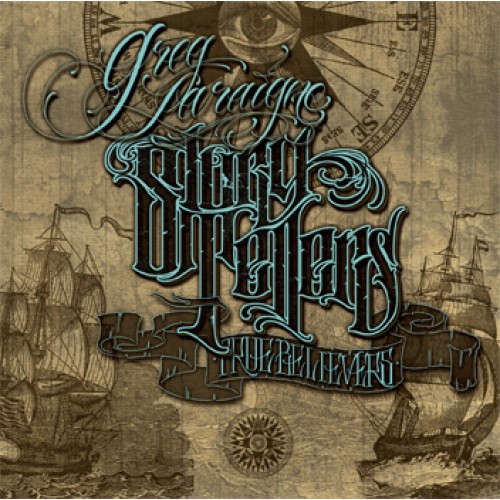 Are you starting to get enough of each and every guy in a punk or hardcore band picking up his acoustic guitar and doing solo shows? As of recently there’s lots of quantity in the ‘Revival’  corner of the scene and with that it gets harder for the few quality acts to stand out. However if you’re into Chuck Ragan and Frank Turner, Swiss tattoo artist and singer Greg Laraigne isn’t someone you should miss out on.

I first came across Greg’s music while attending a punk rock matinee in Little Devil, Tilburg. The Real Danger were playing and Dave Smalley was going to do some solo stuff and a swiss punkrock band called Hateful Monday was added to the line-up as well. Hateful Monday played an okayish set of Good Riddance/Strike Anywhere sounding hardcorepunk. Afterwards their bass player started giving away five song promo’s of his solo work. Five really good songs with great production. Gert and Fieke from Shield Recordings had set up the whole show, also got one of the promo’s and it didn’t take them long to decide they wanted to release Greg Laraigne’s full length. We’re speaking October 2010 here and two years later it’s finally there.

There are many reasons why it took two years for this record to come out, but the most important part is the perfectionist that Greg Laraigne seems to be. While a batch of the song were recorded in the end of 2009 he kept on working and shaping songs and added some new ones in 2011. When listening to Storytellers, True Believers one can only respect Greg’s workethic because the 11 songs on the album are a good as the better material from Chuck Ragan and Frank Turner.

So Chuck if you’re reading this, here’s a guy you should definately get on your next Revival Tour. Just watch the footage below and you’ll see he will fit right in.