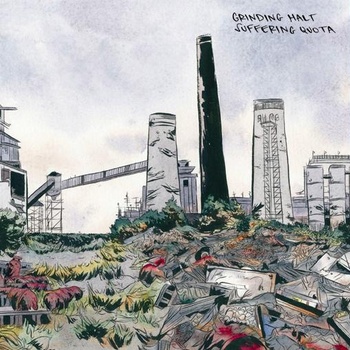 Groningen’s heaviest, fastest and grindiest team up for a split EP. The longrunning Grinding Halt gives us three fast/slow songs with downtuned guitars and of course Dutch lyrics you won’t recognise at first. Suffering Quota exists of Grinding Halt members and has Richard from Ortega in the ranks as the wild beast who handles the screams.

When the Grinding Halt side starts you’ll think it’s the Suffering Quota side because of the grindcore start. Within seconds you hear the screaming of singer Mark who spit out his anger in Dutch about our government and society. The band later continues in their typical doomy version of intense screamo combined with sludgy guitars and dissonant riffs (especially ‘Knuffelverzet’ and ‘Bedrog’). The men are older but still pissed off about our government and society and the loathing is dripping from these songs. It’s comparable to nineties sludge/hardcore bands like Dystopia.

The Suffering Quota songs are relatively slow for them. The mix of oldschool grindcore and Bremen core is the best played in the bulldozer song ‘Becoming One with the Filth’. It’s put in between the dissonant grindcore anthems ‘No Lust For Life’ and ‘Goodbye Self-Awareness’. You feel the anger in the music and the high pitched vocals of Richard are giving the listener that crawling abdominal feeling. After the demo, these three short bullets are all new and I can’t wait until the 12 inch is released.

The drawing of the artwork is an abandoned factory where a lot of bushes are growing. An abandoned old car is also visible. It visualizes the ending of a once industrialized surrounding. I didn’t expect anything different from Grinding Halt and Suffering Quota!