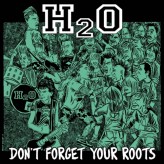 A whole record of H2O covering songs by bands like Madball, Sick Of It All and Rancid amongst others? Another band that attempts to pay homage to Bad Brains and The Clash and fails to deliver?

Believe me despite the fact that H2O is one of my favourite New York bands I had my doubts about the Don’t Forget Your Roots record. I’m usually not fond of bands covering songs they were inspired by because they usually choose covers of songs they’re comfortable with. There are hardly any surprises.

That and the fact that I don’t think of songs like Madball’s Pride or Sick Of It All’s Friends Like You as classics made me more than sceptical about this release. But maybe I shouldn’t judge this record from my perspective. H2O problably didn’t record these songs for the been there seen that generation that’s still going to shows. My guess the main objective the New Yorkers have with Don’t Forget Your Roots is to show the newer generation, who got into the band after Nothing To Prove, where the band comes from. If you look at it from that perspective Don’t Forget Your Roots is actually quite an enjoyable release.

Which brings me to the most stand out tracks. The cover of Verbal Assault’s  Scared is by far the biggest suprise. Who ever thought H2O would have a piano intro on one of their records? Other surprising renditions are the songs Said Gun (originally by Embrace) and Someday I Suppose (originally by Mighty Mighty Bosstones). These three songs stand out because these songs are more ‘obscure’ in a way than the songs by Rancid, Descendents and Social Distortion.

Another nice detail about the record is that H2O here and there changed small parts of the lyrics so they fit better with the band. Instead of singing ‘I’m a gypsy prince covered with diamonds and jewels’, Toby sings ‘I’m a drug free prince, covered with a million tattoos’ on H2O’s cover of I Wanna Live (originally by The Ramones).

Don’t Forget Your Roots isn’t a record that will change the hardcore or punk scene. But it might be that one record that makes a younger generation check out bands like Embrace, Dag Nasty and 7 Seconds. Like the band say themselves in the liner notes: Like these covers? Go check out the originals!